From the RuneScape Wiki, the wiki for all things RuneScape
Jump to: navigation, search
The Old School RuneScape Wiki also has an article on: osrsw:Lady Tangwen Trahaearn

If players speak to her after smelting 100 corrupted ore, she will give them a Smithing experience lamp worth 50,000 experience.

Players doing Treasure Trails clues are sometimes directed to her with the anagram 'Hear A Lady Rant'.

Lady Trahaearn had a husband, Cynog, though he died in a construction freak accident. She continued to rule the Trahaearn Clan, extending her own life with an enhanced exoskeleton suit and created the Trahaearn automatons. She created the automatons because she did not trust her clan due to their lack of decorum and how things should be, stating that she and the automatons would watch over the clan until she could find her desired successor. Her old age also brought about occasional signs of megalomania, which she occasionally brushes off as some "insane" ramblings.

When Lord Iorwerth began his rebellion and started to hunt for the elven clan leaders after they reverted Prifddinas into its seed form, Lady Trahaearn sealed herself in a cavern near the Well of Voyage in the Tirannwn side with three automatons, putting herself into a deep slumber until the city could be re-grown again. In The Voice of the Elders, Lady Trahaearn tasked Gruffydd with creating the automatons and her exoskeleton suit.

Unfortunately, her exoskeleton degraded during her slumber, permanently placing her in her deep slumber. When the adventurer was tasked by Arianwyn to find the missing elders, Gwir gave them a hint that she journeyed south of the well. The adventurer found her hideout, defeated her automatons and repaired her degraded exoskeleton. Initially she attempted to dismiss the adventurer because they were human, but complimented them for their ability to repair her suit as her clan elves would have difficulty. When they informed her it was time to regrow Prifddinas, she went to the Undercity and helped restore Prifddinas with the other clan leaders.

After Prifddinas is restored she waits for the player outside of the gates on their first visit. She is found in the Trahaearn district of Prifddinas, standing just south of the Seren stones, where she explains the purpose of the stones and the corruption they may find while mining them. Upon regrowing Prifddinas, Lady Trahaearn found out that Gruffydd was still alive after the war and scolded him for his "sabotage" in a letter when the elf complained about her giving his work to the human.

When Prifddinas begins to shake, the elders held a meeting and were unsure of how to stop the earthquakes. As the leaders argued, Lady Trahaearn silenced them and recalled an enchanted key that was able to manipulate time. The World Guardian remembered the key, having discovered it while helping Jorral save the museum and brought it to her. Lady Trahaearn modified the key to allow them to visit Guthix to find advice on how to restore Seren. She can also be spoken to together with Lady Ithell to inform the player where to find the Seren shard of prudence.

During Sliske's Endgame, she is one of four elven clan leaders, alongside Lord Amlodd, Arianwyn and Iestin Edern to accompany Seren and aid her in the labyrinth. She was unable to determine how the gods had their divinity stripped from them, claiming it was not science nor technology doing it. 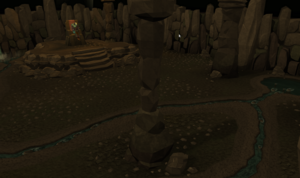 The update history project is a work-in-progress – not all updates to this topic may be covered below. See here for how to help out!
Retrieved from ‘https://runescape.wiki/w/Lady_Trahaearn?oldid=35391083’
Categories:
Hidden categories: