From the RuneScape Wiki, the wiki for all things RuneScape
Jump to navigation Jump to search
Loading...
MonsterNPC 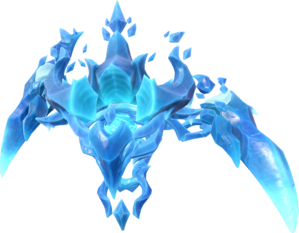 The Arch-Glacor is a massive glacor who "leads" the glacors sent by Wen to the Elder God Wars Dungeon as part of the Glacor Front.[1]

Like Kerapac, the bound and TzKal-Zuk, the Arch-Glacor possesses both normal and hard mode encounters. In normal mode, the boss provides a customisable fight. The player can add or remove mechanics as desired to make the fight easier or harder, which also affects the quantity and quality of rewards received. By defeating the boss with all mechanics active in a solo instance, the player can unlock its hard mode encounter. In normal mode, deaths are considered safe (including for Hardcore Ironmen[2]); the player is teleported to safety should they fall. There is a rolling damage cap in place with a set amount of mechanics active that prevents players from skipping most mechanics. The boss is considered a glacor for the purposes of a slayer task and ushabti, and the slayer helmet provides its benefits for normal mode.[1][3]

In hard mode, the boss fight becomes similar to that of Telos, the Warden - the encounter can only be entered solo, players cannot teleport out of the fight (meaning victory or death), deaths are unsafe, and there is an enrage/streaking system, with the boss' enrage capping at 4,000%. The boss' mechanics are also adjusted for hard mode. The effects of a slayer helmet will not work on hard mode if on task.[3]

Drops from the boss include the Scripture of Wen, a boss pet and a Leng artefact, along with materials to create a pair of tier 85 melee weapons - the Dark ice shard and Dark ice sliver weapons, made from Glacor remnants and Dark nilas. In hard mode, a new drop, the Frozen Core of Leng, is added, which can be used to upgrade the weapons to tier 95 - the Dark Shard of Leng and Dark Sliver of Leng. The Leng artefact, along with the remnants, allows players to upgrade the nightmare gauntlets, gloves of passage and Kerapac's wrist wraps from tier 85 to tier 90.[2]

Deathtouched darts do not work on this boss, and attempting to do so in either normal mode or hard mode will give the message "You cannot kill that with a dart, so it would be a waste to throw it".

During Zaros' trip across the universe, he discovered Leng and its Arch-Glacors. He subsequently killed one and transformed its energy into the ice crystal, which he used to create the Nihil and later gave it to Nex to serve as a source of power.[4]

Enakhra later abandoned the other mages, forcing Azzanadra to send them off for their own safety. With most of its powers unchecked, the Arch-Glacor advanced towards the cathedral, but Azzanadra's new god powers were able to keep it at bay. However, by moving away from the aqueduct, the Arch-Glacor left behind four Generating glacors that were spawning many glacytes that nearly overwhelmed him until the World Guardian arrived and eliminated them, allowing Azzanadra to fight without distractions. Azzanadra was later able to send the Arch-Glacor back to Leng.

Arch-Glacor is located at the aqueduct at the Glacor Front on the southern side of Senntisten.

The Arch-Glacor fight consists of six main mechanics, five of which can be enabled or disabled before the fight. Mechanics can be toggled either from the user interface or by speaking to the mage responsible for holding back the corresponding mechanic. Hard mode can also be toggled in a similar fashion once the player has unlocked the ability to do so by completing the fight solo with all mechanics enabled, in an instance set to one player. Hard Mode activates all mechanics.[1]

The number of active mechanics influences the rewards obtained from the boss. It is possible, although unlikely, to obtain unique drops with no mechanics enabled.

Arch-Glacor's difficulty is scalable: players are able to choose the fight's difficulty which affects both the strength of the boss and potential reward value. In normal mode, this involves enabling or disabling any of the five mechanics before the fight. On the other hand, when initiating a confrontation with Arch-Glacor in hard mode, the player receives an interface in which they may select a custom enrage level (between 0% and the highest enrage level on which they successfully scored a kill plus 5%). As the boss gains enrage, its life points and damage inflicted increase.

In normal mode, Arch-Glacor's life points scale based on the number of mechanics enabled, equalling

is the number of mechanics enabled (not including Creeping Ice), meaning the boss will have between 65,000 and 365,000 life points.

, is expressed as a function of enrage,

, in the following way:

In normal mode, three sets of drops are awarded at a time. In solo encounters, the player receives all three drops. In duo encounters, the leftover drop is awarded to the top damaging player. In larger groups, the three top damage dealers receive one drop each. The quantity and quality of drops in normal mode are dependent on how many mechanics were enabled.

Charms are dropped in set of five; at most three sets can be obtained from a kill for a total of 15 charms.

It is possible to receive multiple secondary drops for a single primary drop in normal mode.

In hard mode, the rewards are obtained through a streak/enrage system. After each kill, players have the option to continue the challenge, or claim the rewards. One reward is given at a time, but the quantity of these items increases with higher killstreak and possibly enrage. Likewise, if the player dies during their streak, part of their accumulated rewards is lost based on the amount of killstreak the player had prior to their death. This starts at 5% saved for 1 killstreak and caps at 75% saved at 15+ killstreak, rounded down. This reduction applies by whole numbers of the items held in the chest, not the total value of rewards. With the exception of the glacor core, no charms or other secondary drops are obtainable in hard mode.

It was worked out by the players that the equation for the unique item drop rates could be:

is the enrage of Arch-Glacor and

is the number of total kills done in the streak (so Streak+1 if using the Streak value in the loot interface).

This is more easily interpreted as:

The validity of these formulae remains unconfirmed, but it matches the known drop rates at different streaks and enrages given from the reveal of the drop rates from the Elder God Wars Dungeon.

When the unique item table is rolled, the player has the chance for the following:

When claiming streaks, if the player's inventory and bank is full, any remaining rewards will remain inside the chest. If the player logs out before claiming these drops, they will be lost. They will be withdrawn in noted form if this occurs.

Alternatively, if the player dies, their streak ends, some of their loot is deducted, and they can claim their remaining loot from the frozen chest outside the boss arena.

This calculator along with documentation can be found at the top of this page.