Horror from the Deep

Horror from the Deep is an experienced quest revolving around the mysterious disappearance of Jossik, keeper of the Lighthouse near the Fremennik Province. As the title suggests, the investigations lead to the discovery of very dangerous creatures living beneath the lighthouse.

The Lighthouse protecting Kandarin's north-western coastline has mysteriously stopped operating, and contact with the Lighthouse-keeper Jossik has been lost.

The council would greatly appreciate it if somebody could discover for them what has happened to this most vital landscape feature. 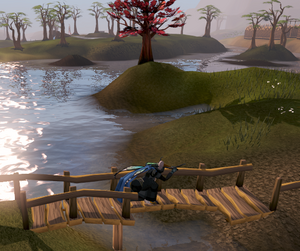 Fixing the bridge to the Lighthouse.

Travel to the Lighthouse by using an enchanted lyre, a games necklace teleport to the Barbarian Outpost, a House Teleport, if your house is in Rellekka, or any other method that you wish. Start the quest by speaking to Larrissa, who can be found standing just outside the lighthouse entrance.

Larrissa tells you that she thinks that her boyfriend, who resides in the lighthouse, has gone missing as she hasn't seen him for a few days. To further her fears, the light is switched off and the front door bolted shut, which she says is unlike him.

A player speaking to Gunnjorn.

When you offer to help search for her boyfriend, Larrissa suggests you speak to Gunnjorn at the Barbarian Outpost for a spare key to the lighthouse and then fix the broken bridge to the east.

To be able to pass the guards and enter the Agility course to talk to Gunnjorn, you must have completed the Bar Crawl miniquest. 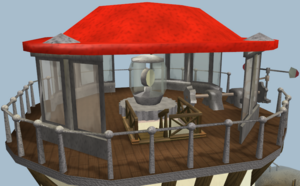 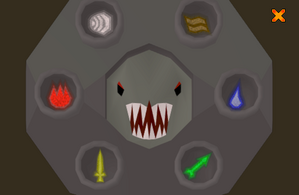 Go down to the basement of the lighthouse, where you will find a small cavern with a strange wall, having six empty slots fitted into its frame.

This is your last chance to prepare for the fight.

If you haven't prepared for this fight with armour and runes for casting magic, teleport to any place with a bank to ready yourself. If you only brought a games necklace, then use it to teleport to the Gamers Grotto or Burthorpe Troll Invasion and bank there. While you are there, you may wish to pick up any quick teletab to any city or your POH, just in case you are close to death, to save yourself. 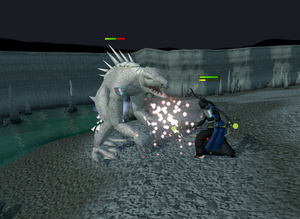 The fight with the Dagannoth mother.

If you cannot see the colour changes very well, look to the chat box. There would be a message "The Dagannoth mother turns (colour)..." Also, you can change the graphics to "safe mode" to brighten the scene, allowing you to see her colour clearly. Using the wrong type of attack incurs splash damage.

Get ready to face the mother!

Jossik, injured in the dungeon below the lighthouse.

Once you are ready, walk through the unlocked wall and down the ladder. You find Jossik alive, but hurt and resting against the dungeon wall. He tells you that his search for his lost uncle, Silas, had brought him past the secret door, but he was attacked by a monster who was able to trap him there.

As he is talking, he announces that the monster is coming back. A cutscene plays where a dagannoth appears from the water. The monster can be fairly easily disposed; put on protect from melee and range or melee it, as you need to save your runes for its mother.

After you defeat it, try to help Jossik up to the surface, but he tells you that that wasn't the monster that had attacked him. A cutscene will show the Dagannoth mother emerging into the cavern, and engaging you immediately into battle.

After you defeat the Dagannoth mother, congratulations. You have survived the Horror from the Deep!

You may now choose a book affiliated with three gods: Saradomin's Book of Wisdom, Guthix's Book of Balance or Zamorak's Book of Chaos. Be sure to choose the same book twice in a row when he asks if you are sure about your selection. 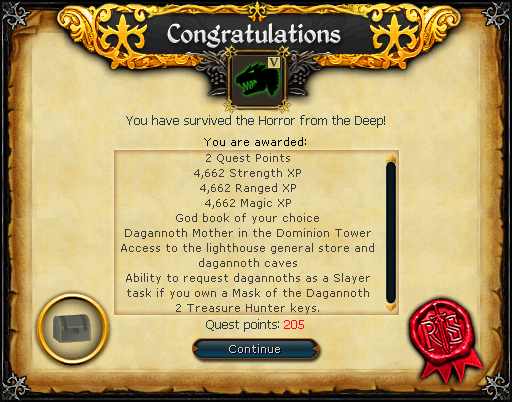 Horror from the Deep is directly required for the following quests/miniquests: