Osman is the current Pharaoh of Menaphos and former Spy Master of Al Kharid.[2] He is a member of the Secret Council of Gielinor, representing Al Kharid. He can be found inside of the palace in Al Kharid. He cannot be accessed until the player completes Stolen Hearts. After Our Man in the North, he disappears until 'Phite Club, where he appears at the start and the end of the quest before becoming inaccessible. He is a descendent of Senliten through her son Osmumten.[3]

He used to be good friends with a Sorceress in southern Al Kharid though their relationship has soured to the point where she refuses to give him the sq'irks she grows, which he has a particular fondness for.[4] He rewards players who get him sq'irkjuice from the Sorceress's Garden with Thieving experience.

He will sell replacement Keris daggers for a fee of 20,000 coins. If the player did not take the dagger from the corpse of the scarab he will provide it for free once.

Osman moved to Al Kharid at some point prior to Year 169 of the Fifth Age with his daughter Leela as the Head of the Palace Guard. He had a reputation for being strict and disciplinarian.[5] He caught a local thief, Ozan, in the treasure vault of Al Kharid, supposedly in the act of stealing the Kharid-ib.[1] He banished Ozan, threatening to arrest him if he ever returned.[6] He also had Khnum expelled from the Palace Guard.[7]

He began gathering historical records of any quality, especially those involving, regardless of their worth or state, in a bid to prove his heritage.[8] He used Simon Templeton as a salesman, but discontinued the arrangement when Simon grew suspicious. This caused the two men to have a mutual distrust of one another.[9][10]

In Year 169, Ali Mirza, son of Emir Shah and heir to Al Kharid, went missing. Osman was ordered to find him. He caught Ozan and an adventurer in the treasure vault and brought them before the Emir when they claimed to have information about Prince Ali. The Emir died in front of them, though Osman did not blame either of the thieves for it. He lifted Ozan's exile, allowing him to be an Al Kharid citizen again.

He later called Ozan and the adventurer to the treasure vault and did not give them instructions on how to obtain the true Kharid-ib nor did he tell them how to use it to find Prince Ali. When the Kharid-ib was lost to Amascut, he was forced to exile Ozan again.

Osman later went to Sophanem after being convinced by the adventurer and Maisa, one of his agents. He snuck into the city then the underground tunnels which collapsed while he was in them. He came to the adventurer's aid, helping them with the scarab that had attacked and possibly taking the dagger used to weaken it.

When Leela attempted to aid some monkeys with returning to the desert, Osman tracked his daughter down to Uzer Mastaba and berated her for abandoning her post for work he deemed unimportant and causing him embarrassment.

During the latest meeting of the Secret Council of Gielinor, he was kidnapped by Evil Bob and taken to ScapeRune and so wasn't present when the Culinaromancer was freed.

When the Pharaoh of Menaphos made a request for the resumption of trade between their cities, Osman was suspicious about the invitation and wanted to send spies to gather information. Emir Ali refused his request. Osman privately spoke with Ali's chosen envoy, the adventurer who had previously rescued the prince, and warned them to stay on their guard. He also requested they use their time in the city to search for books relating to the lineage of the city's pharaohs.

He returned again to Senliten's tomb, this time berating his daughter for her attempts to help crocodiles. They argued over whose plan to save Menaphos was better and he stormed out.

The adventurer managed to locate the book Osman sought and took it to Senliten and Leela. They revealed Osman's intent - to prove his ancestry as Senliten's descendent and claim his rightful position as the Pharaoh as Menaphos. The adventurer handed over the book right as Ambassador Jabari incapacitated the Kharidian guards and walked into the Al Kharid palace. Jabari revealed that Osman had been vital in Emir Ali's kidnapping before running. The adventurer went to deal with Jabari while Ali dealt with Osman. Osman pleaded his intentions, claiming he had been trying to bring peace to the entire region by positioning himself to take over Menaphos then strike a deal with Al Kharid and that he had plans in place to ensure Ali's safety. Ali, furious, declared Osman a traitor, stripping him of his position as spymaster and exiling him while stating that he wanted Osman executed. Osman left, asking that Ali one day forgive him.

He spent some time with Senliten, gathering information. He snuck in Menaphos then used this information to gather allies, such as Grand Vizier Ehsan for a planned coup. He had the adventurer convince each faction leader, convincing them that Osman would be more peaceful and benevolent than the current Pharaoh, then had the adventurer march upon the Golden Palace to convince the Pharaoh to step aside. The Pharaoh was less than willing, stating that he was ruler by divine choice, attacking the adventurer. Once he was defeated, the four faction leaders arrived, each with plans for the Pharaoh: imprisonment, slavery, exile and death. Osman came in seconds after the Pharaoh's fate was decided and executed him, declaring it his right. He then took on the role of Pharaoh, leader of Menaphos, and dismissed the adventurer.

Osman played a minor role in the quest Prince Ali Rescue. He directed the player towards his daughter Leela, who had tracked the kidnapped Prince Ali to a jail cell just outside Draynor Village. He turned a key print into a bronze key, which was then used to rescue the prince.

In this game, you have to be prepared for anything.

Osman, Diamond in the Rough

Osman is very distrustful, acting against his enemies and having plans on how to defeat his allies.[11] He places heavy worth on his role as spymaster, to the extent that others consider him obsessive.[12] He is considered to be manipulative, especially when it comes to his agents,[13] and considers people to be expendable.[14] He also threatens those who do not do as he wishes.[15] His controlling nature, willingness to do whatever is necessary to achieve his aims and constant suspicions have greatly strained his relationship with his daughter Leela.[16][17] This may be due to corruption caused by Amascut.[18]

He harbours a great distrust of Menaphos and the Pharaoh, believing them to be a threat.[19] He believes them capable of kidnapping[20], slavery and warmongering.[21] He has also compared the Menaphites' nature to that of the hostile Scabarites beneath Sophanem in a letter to his agent Kaleef.[22] He considers any opportunity to agitate Menaphos to be a good one.[23][24] His actions mean that Menaphos have good reason to get hold of him.[25] Despite his feelings towards the political side of the city, he cares for the people of Menaphos, believing he is capable of making their lives better.[26][27]

Transcripts Osman is the author or co-author of: 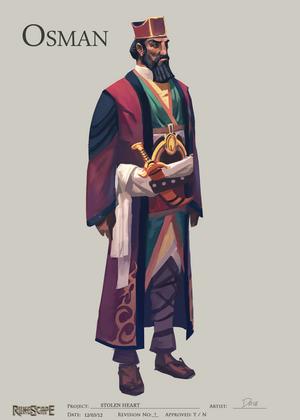