From the RuneScape Wiki, the wiki for all things RuneScape
Jump to: navigation, search
The Old School RuneScape Wiki also has an article on: osrsw:Regicide
For the achievement, see Regicide (achievement).

Regicide is the fourth quest in the Elf quest series, where King Lathas sends the player to Tirannwn to kill his brother, King Tyras, and end his tyranny. 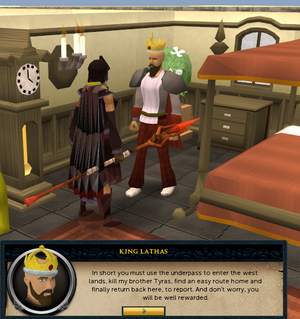 After completing Underground Pass, a King's messenger will appear and give you a message from King Lathas. This can take up to 35 minutes. After receiving the message, go and talk to King Lathas in Ardougne Castle in East Ardougne. He informs you that he has managed to track down his brother, King Tyras, with the aid of the elves; Tyras and his men are hiding in the elven lands. He tasks you with venturing to Tirannwn, killing his brother, and establishing an easy transport route to the western lands.

Should you attempt to go to the Well of Voyage before talking to King Lathas, Iban will still be there and will prevent you from continuing.

Before heading into the Underground Pass, make sure you have all the items required to get through it as well to complete a portion of the quest up until you can activate the Tirannwn lodestone. This will save time and negate any unnecessary trips through the Underground Pass. It is recommended to bring some food for healing in case you fall down in the Pass. The trip will also provide a convenient opportunity to complete the Iban You from Hurting Me! achievement in the Tirannwn achievements set.

Once you are prepared, return to the Underground Pass. See this separate guide for detailed instructions for getting through the pass and reaching the well.

Make your way to Iban's Temple, the location where you defeated him during the Underground Pass quest. Although Iban may appear in the temple, it is safe to enter. If necessary, talk to Koftik for some extra food and to recharge your Prayer and Summoning points.

The Well of Voyage is in the centre of the temple. Enter it to travel to Isafdar.

Once on the other side of the Well, locate the unmarked exit, which is a blank wall west of the obelisk. Exit the cave and head west. The elf Idris will appear but will shortly be killed by Morvran and Essyllt. The elven guards will tell you to talk with Lord Iorwerth at the Elf Camp in the north-western corner of the forest.

To travel to the elf camp (not the Tyras' camp), you will need to traverse past the obstacles in the elven forest. These traps do not stop forward motion, with the exception of the stick trap; you simply fall right into/over them and take damage. You will need to use the balance log shortcut the first few times you enter the camp.

The Tirannwn lodestone is not far from your current location, hence it is recommended to activate it now for easier travel. Also, if you run out of food, you can kill the rabbits around Isafdar and cook them on one of the fire pits in the elf camp.

While moving around, you may encounter four different obstacles: 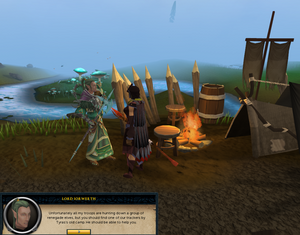 Meeting with Lord Iorwerth in his camp, who instructs you to speak to his elf tracker.

Upon reaching the Elf Camp, talk to Lord Iorwerth and tell him that King Lathas sent you. He directs you to meet up with his tracker, who can guide you to the Tyras Camp.

Teleport to the Tirannwn lodestone if activated or head south-east of the camp until you reach it. There will be an elf tracker nearby. Talk with him and he will refuse to help unless you can prove you were sent by Lord Iorwerth. Return to the Elf Camp and report to Lord Iorwerth, who will give you a crystal pendant. Return to the elf tracker, who will accept the pendant as proof.

He will tell you your current location is the site of Tyras's old camp but that the king and his troops have since moved on. He tells you to check the western side of the site. Head west a bit and locate the footprints heading into the forest; click and try to follow them and you'll be told you can't. Report back to the elf tracker and he will teach you how to pass through the dense forests in Isafdar. Go back and climb through the dense forest. 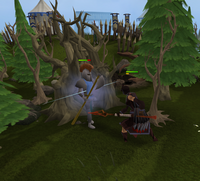 The battle with the Tyras Guard

After you pass through the dense forest, a level 58 Tyras guard will attack you, equipped with a steel halberd. He should be an easy defeat for experienced players; however, you may use prayer and food if the need arises.

After you've killed the guard, continue north, taking caution of a tripwire nearby. After navigating past the tripwire, go through the dense forest up ahead, and head west and then south through more dense forest located next to a Tyras guard to reach Tyras Camp. If you ran from the Tyras guard that appeared earlier, you will have to kill him to continue.

Here you will be able to charter a ship to and from Port Tyras, unlocking an alternative route to Isafdar. The trip costs 3,200 coins (This can be reduced to only 1,600 coins or even 800 coins with the ring of charos (a), depending on whether or not you have completed Cabin Fever).

Once in the camp, speak to General Hining and request to see King Tyras. He tells you that the King doesn't ever entertain an audience and sends you on your way. Hence you must now devise a plan to kill Tyras inside his tent.

While here, grab at least 2 of the barrels that spawn around the camp. An extra barrel of naphtha is needed for Mourning's End Part I, so if you plan on completing that quest, avoid making an extra trip to the camp and grab a few spares in case you make a mistake later.

Go back to Lord Iorwerth and read the Big Book of Bangs he hands you. Keep the book as you will need it later. You must now follow the instructions in the book to create an explosive compound. 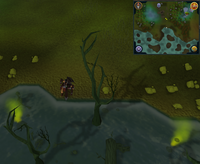 The location to find the coal tar

Once you have these items, head to Rimmington.

Items needed: 6-30 coal, the Big Book of Bangs, barrel of coal-tar, an empty barrel, strip of cloth, quicklime, ground sulphur, and a pot

The interface when making a barrel of naphtha

Go to the chemist's house just west of Rimmington and talk to him. Noting the book Iorwerth gave you, he tells you to use his still to create the required mixture; use your barrel of coal-tar on the fractionation still outside his house.

To operate the still:

If you plan on completing Mourning's End Part I in the future, it is recommended that you repeat the process to obtain a second barrel of naphtha. Do not convert this spare into a barrel bomb.

Add the pot of quicklime and ground sulphur to the naphta mix, producing a barrel bomb. Finally, use the strip of cloth on the bomb to complete it.

Items needed: Barrel bomb and a cooked rabbit (can be bought in raw form from a charter crewmember, and cooked anywhere in Isafdar)

Head back to Tyras' camp using a charter ship to Port Tyras. Cross the dense forest north of the camp and offer the cooked rabbit to the plainclothes Tyras guard near the catapult as a distraction. Free from any interference, use the barrel bomb on the catapult.

You will see the bomb hit King Tyras' tent and burn it to the ground. Go back to Lord Iorwerth, who gives you a sealed message to take to King Lathas and grants you access to the overpass of Arandar.

Make sure you have the letter before transporting away. If you have a clue scroll in your inventory meant for Lord Iorwerth, you must either complete or drop it before moving on with the quest. 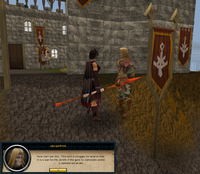 Arianwyn shows you what the message really says and recruits you to his side.

Travel back to Ardougne Castle by any method you want. On the way to delivering the message, an elf named Arianwyn suddenly appears before you. He breaks the magic seal on the letter and asks you to read it.

In the letter, Lord Iorwerth assures King Lathas that Tyras has been killed and that the Dark Lord can enter Gielinor. Arianwyn further reveals the "path" is connected to Zamorak's realm and convinces you to join his side instead. To avoid arousing any suspicions, Arianwyn tells you to claim your reward from Lathas. 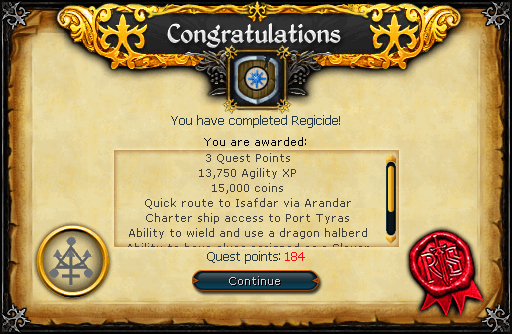 Regicide is directly required for the following quests/miniquests: