From the RuneScape Wiki, the wiki for all things RuneScape
Jump to navigation Jump to search
For other uses, see Dark Lord (disambiguation).
For the pet created from shadow creature drops, see Penny.
The Old School RuneScape Wiki also has an article on: osrsw:Dark Lord

The Dark Lord is the overarching villain in the Elven Civil War quest series (though it is unseen until the final quest, where it is the final boss). The Dark Lord was a mysterious entity that the Iorwerth elven clan tried to summon to Gielinor. It was Seren's previous avatar, Haluned, infused with Seren's negative aspects, the part of her mind fascinated with death and the death of her elven followers in particular. The Dark Lord has a special attack that deals 10% of the player's maximum life points. 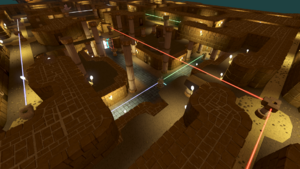 The Temple of Light.

At the end of the God Wars, Seren, the elves' crystalline goddess, shattered herself into shards of crystal. To stop her remaining negative energy from threatening elves or their city, Prifddinas, Seren channelled her negative aspects into her avatar, Haluned, and ordered it away. It made its way underneath the Galarpos Mountains, attracted to the Death Altar's death energy, but it was unable to access the altar's power. The Hefin Clan built the Temple of Light around the Death Altar to try seal in the Dark Lord. From within the temple, the Dark Lord began whispering to people in the nearby Underground Pass, driving them mad in an attempt to see interesting deaths.

Eventually, Lord Iorwerth came into the Dark Lord's service and worked with King Lathas Ardignas to free it from the Temple of Light. Lathas told an adventurer that his brother, King Tyras, was forced by the Dark Lord to drink from the Chalice of Eternity, corrupting him, but this was a lie. Both Lathas and General Hining assumed the Dark Lord to be Zamorak, but they were proven wrong when, after Zamorak returned to Gielinor in the Sixth Age, the Iorwerths continued to try summon the Dark Lord.

Iorwerth established the Prifddinas Death Guard in West Ardougne, under the premise a plague was infecting the city. They used quarantined citizens as slaves to dig into the Temple of Light, to free the Dark Lord and use the Death Altar to restore Prifddinas without the aid of other clans, leaving Iorwerth Clan as sole rulers.

By the time the slaves reached the Temple, its safeguards had broken, but an adventurer quickly restored them, preventing the Iorwerths from getting in and using the Death Altar. Lord Iorwerth's next plan involved slaughtering West Ardougne's entire population to create an equivalent amount of death energy, but this too was foiled by the adventurer. 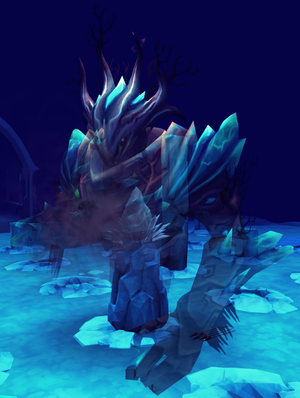 The weakened form of the Dark Lord. 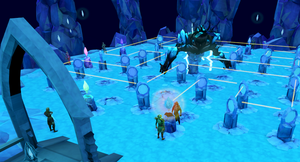 The Dark Lord is beaten as Prifddinas is restored.

Ultimately, the adventurer and other Elf Elders (with Iestin Edern standing in for Lord Iorwerth) broke the Grand Library's seals to try restore Prifddinas. But, the Dark Lord was able to manifest within the Library due to the broken seals and energy from King Lathas' death (by either the Dark Lord or adventurer) and deaths in a battle between the Tyras guards and Death Guard. The Dark Lord tried to corrupt Prifddinas and stop its restoration, by preventing light from reaching Prifddinas' seed. The Dark Lord also summoned and killed Lord Iorwerth, to become more powerful, referring to the deaths of a king and elven lord as "delicious". By attacking the Dark Lord, the adventurer weakened it enough for light to pass through it, weakening it further and allowing the seals on Prifddinas to be broken. The Dark Lord's manifestation was defeated, but The Dark Lord's fate after this was unknown (it was maybe dead or once again sealed within the Temple of Light).

The following takes place during The Light Within.

During the attempt to restore Seren, the adventurer is reminded the Dark Lord, Haluned, was a part of Seren as well. They then visit Morvran to help enter the Grand Library to find what remains of the Dark Lord, as a single remnant of a dark crystal. The adventurer has a choice to decide if it's best to complete Seren with the dark crystal, or without, kicking it into the dark abyss below. If restored within Seren and revived on Freneskae, she'll accept that she should never have hid from her inferior past, never to have removed it, rather take heed on to protect her elves by controlling her dark side.