From the RuneScape Wiki, the wiki for all things RuneScape
Jump to navigation Jump to search
Loading...
SumonaJesmona

Sumona is an incarnation of Amascut found in the north of Pollnivneach, in a house south-east of the magic carpet transport spot. She can be spoken to to begin the Smoking Kills quest, though she won't talk to the player with a cat out.

In Smoking Kills, Sumona tells you that her sister, Jesmona, has been caught by a monster and trapped under the well in the centre of Pollnivneach. However, after the quest, players learn that Sumona and Jesmona are one and the same. This is revealed by Catolax in the Pollnivneach Slayer Dungeon, during the final cutscene. He further explains that Sumona is, in fact, Amascut, the Devourer, in disguise. However, as Amascut promised the player a reward in return for saving her sister, she is forced to act as a Slayer master. However, this does not stop her from sending them on dangerous assignments, as she hopes they will eventually die during one of them.

After players complete the quest, Sumona becomes a new Slayer Master (with 90 Combat and 35 Slayer). She also explains about the Slayer points obtained for each Slayer assignment completed. Although she is a lower-levelled Slayer Master, she has the highest weighting for corrupted creature and soul devourer tasks.

The amount of Slayer points gained by completing tasks depends on the amount of consecutively completed tasks. Since Smoking kills is required to use Sumona as a Slayer Master, tasks assigned by her always grant full points upon completion.

Completing 50 tasks assigned by Sumona grants an average of 19.2 points per tasks, if Smoking kills has been completed. 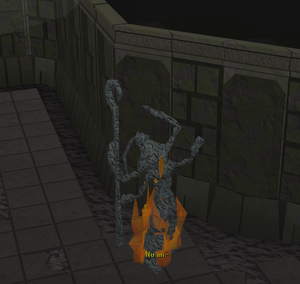 Sumona's special task is for the player to slay the Kalphite Queen. The queen is very hard to kill solo, and players on this task can be assisted by another player. However, the player is only credited with completing the task if they cause the majority of the damage to the queen, and CoinShare/LootShare must be off. The slayer helmet does not seem to work for the queen's second form.

. For Sumona, assuming all possible assignments are available,