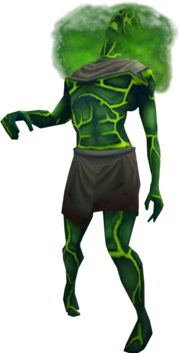 Corrupted workers can be found inside the Sophanem Slayer Dungeon. Level 103 Slayer is required to fight them, and a feather of Ma'at is required to complete each kill. A cat named Katarina has a chance to spawn upon each successful kill.

Regardless of chest auto-loot settings, all tertiary drops, with the exception of vital sparks, are dropped to the ground.