From the RuneScape Wiki, the wiki for all things RuneScape
Jump to navigation Jump to search
This article is about the polar bear agent. For the certer in RuneScape Classic, see Chuck (certer).
Chuck? (edit)? (edit) 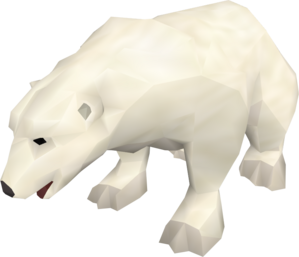 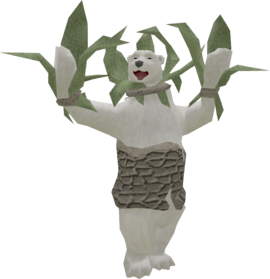 Chuck is a talking polar bear and a member of the PBJ, an organisation meant to stop the penguins from taking over Gielinor.

During Hunt for Red Raktuber, Larry is taken away forcibly to the motherland by Pescaling Pax. Pescaling then abandons the player on a deserted island. This is the island where the player first encounters Chuck, poorly disguised as a palm tree. After Chuck is spotted and told about his ineptitude at disguises, he remarks Hmmm... We may need to have a meeting about that. To escape the island, Chuck allows the player to ride on his belly to East Ardougne.

Chuck then moves in the polar bear pen in the Ardougne Zoo and takes over the Larry's job in Penguin Hide and Seek. Players can talk to him to get the rewards. Chuck, as he reveals after the quest, is currently keeping an eye out for penguins like Larry normally would. He will also replace your Clockwork book if you lose it, although you can still get one from your house. He also features in Some Like It Cold and Back to the Freezer.

Players can ask Chuck for hints to locate penguin spys. However the hints he gives are randomized so a player can get the hint for the same penguin spy multiple times. 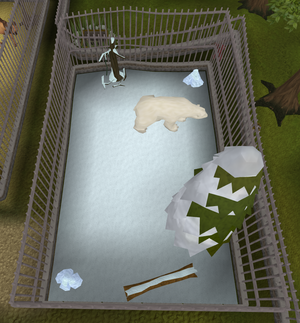 Chuck in his assigned pen in Ardougne Zoo.