From the RuneScape Wiki, the wiki for all things RuneScape
Jump to navigation Jump to search
The Old School RuneScape Wiki also has an article on: osrsw:Cyrisus
Cyrisus? (edit)? (edit) 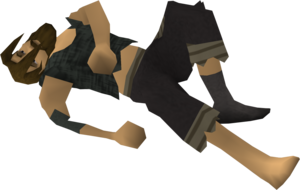 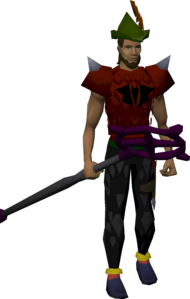 Cyrisus (pronounced səriːzʉs[1]) is located deep in the Lunar Isle mine, where he has been unconscious for some time. In Dream Mentor, the player nurses him back to good health, but only known to the player at that point as "Fallen Man", by providing him with food and words of encouragement, until he is well enough to reveal to the player who he is. He requests that the player fetch him his favourite outfit from his bank, depending on what the player's combat level is based on.

Once he is dressed he reveals that although he is incredibly skilled, being able to smith full sets of Rune armour, bake Summer pies and grow Spirit Trees, and with a combat level of 138, he has 99 in most if not all combat skills, but he is mortally afraid of combat. The Oneiromancer suggests that the player helps Cyrisus overcome this fear by entering Dream World with him to help him conquer his fears. Once the player enters Cyrisus's dreamland and vanquishes his feelings of inadequacy, inability to endure, pacifism, inexperience and other doubts, he overcomes his fear of combat. By way of thanks, he shares with the player some knowledge he picked up during his time on Lunar Isle.

Cyrisus became level 99 in all melee skills while being terrified of combat. It was revealed in the August 2007 Postbag from the Hedge that he got his high combat level by doing nothing but killing 300 chickens a day for 30 years, which actually does come out to around the experience needed for the melee skills (over 39 million experience), with burying the bones adding up to the experience needed for 99 Prayer!

After Cyrisus leaves, his newfound lust for battle takes over. If the player talks to him he will either be killing the Kalphite Queen with some slayer masters, fighting TzTok-Jad, attending a meeting with the leaders of RuneScape, or practising Summoning. Since most of the time he's travelling around Gielinor looking for new adventures, it is impossible to find him at a specific location. In order to contact him you must use the NPC Contact lunar spell.

He has a small role in the While Guthix Sleeps quest, belonging to the band of eight warriors who attempt to save the player from the fortress of Lucien. He is one of the six who perish in the ensuing battle against Lucien. After the quest, there is no way to contact Cyrisus and no replacement for him. The only remainder of him in-game is a statue in Falador Park, and a memory in the Dominion Tower where he has returned to his cowardly state.

Come on Cyrisus.. you can do this!

You shall never get me!

Fight to give me courage.

Let me see how you do it.

Don't worry, I shall attack shortly.