Essyllt Iorwerth, also known as the Head Mourner, was the commander of the Prifddinas Death Guard and a member of the Iorwerth Clan. He was one of Lord Iorwerth's highest officers who sought to find an entrance to the Temple of Light in order to harvest its power to bring back the Dark Lord. To this end, Iorwerth convinced King Lathas to fake a plague in West Ardougne so that the mourners could quarantine the area and thereby have free access to the tunnels which led to the temple. The head mourner was handed the duty of capturing people who fell ill to the "plague" and then using them as slaves to dig through the tunnels to find the temple.

Attempting to talk to him during Regicide results in "Nothing interesting happens." 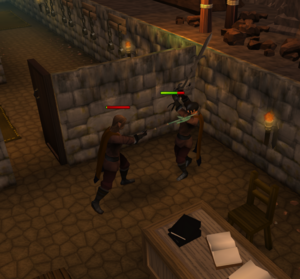 The head mourner is fought and removed from power during Plague's End.

Essyllt ordered Elena's imprisonment after learning that she was investigating West Ardougne for details of the plague supposedly brought on by the return of King Tyras. The adventurer rescues Elena and, together with her mentor Guidor in Varrock, they discover that the plague was a lie. The same adventurer soon discovered the elven lands, and when one of the resistance members called Idris confronts the player, Essylt and Morvran appear and killed him. They then redirected them to Lord Iorwerth before resuming their hunt for the rebels.

Eventually, the adventurer infiltrates the mourners as a new recruit in Mourning's End Part I. Essyllt tasked them with interrogating a gnome; they had captured the gnome because their device had broken and only a gnome had the knowledge on how to repair it. [1] The device was used to dye Farmer Brumty's sheep to maintain the hoax of the plague.

Essylt was pleased with the recruit's progress and had even admitted that he would have sent someone else to do the job if they hadn't. With the sheep now repainted, Essylt told the recruit to replicate the plague. He stated that though it was fake, some joker (the same recruit) had poisoned their food and gave them symptoms akin to the plague. [2] He tasked them to replicate the illness and contaminate two of the food stores, so his mourners could get additional slaves. The recruit informed Elena of their task, and she reluctantly helped them. The recruit replicated the toxin and contaminated the depots.

Pleased with the recruit's enthusiasm and completion of their tasks, the recruit asked him why they needed slaves. Essyllt told them that they had heard of a place with massive power underneath the Arandar mountains, so they needed slaves to dig towards it. [3] While digging they found several caves filled with dark beasts, who killed a few slaves each day, which annoyed him. Uncovering and activating the temple would speed up the return of the Dark Lord. Essyllt had another task for the recruit, but he told them that he had a key being copied for them, telling them to report in regularly to see if it was ready to be picked up.

The recruit came by sometime later to see if the key was ready. Essyllt told them that the elf he had sent had ten times as much keys cut as they needed, and handed them one of the keys. [4] He told them that while they were searching for the Temple of Light, one of their dig teams went missing; he tasked the recruit with finding what happened to them. [5] They reported the fate of the dig team to Arianwyn, who tasked them with reactivating the Temple's safeguards. They did so successfully, and the temple could no longer be accessed without a special crystal for the next thousand years. The Iorwerth Clan remained unaware of a back entrance to the Temple, having been excavated by some dwarves who were stranded in the Underground Pass many years ago.

The recruit needed to bring Arianwyn in after Thorgel reported strange anomalies occurring in the Temple of Light, but they needed to make sure the Death Guard would not notice them. While the gnome caused a ruckus, the recruit managed to smuggle Arianwyn in with an elven crystal.

Essyllt was busy considering his options and attempting to find his missing dig crews. The recruit had the option to talk to him about their gnome captive, and Essyllt asked what of him. The recruit suggested to release the gnome, much to his surprise. However, the recruit told him that gnomes had magicks of their own, and if a curious child or thief spotted him, it would reveal the plague to be a hoax and endanger their operations. Essyllt gave this much consideration, and eventually had the gnome blindfolded out of Mourner Headquarters. [6] If he was not spoken to about the captive, then he considered him too much of a risk and had him killed with poisoned toad crunchies. [7]

Following the discovery of the Prifddinas Undercity, Arianwyn had Thorgel and his dwarves excavate the rubble to clear a path. The Death Guard soon discovered the Temple of Light and their missing dig teams, but the safeguards had been re-activated and prevented them from entering. Following this setback, Lord Iorwerth tasked Essyllt with finding another source of death energy to bring back the Dark Lord. [8]

During the Ardougne Revolution, the revolutionaries storm the headquarters and kill the mourners inside. Essyllt personally fights the adventurer after they kill several mourners but is eventually defeated and begs to be spared. He claims that he has a wife and child, and that he was just following orders. [9] Essyllt claims that he would give the citizens a "quick and merciful" death by herding them into a cavern and collapsing the roof on top of them. [10] He could be either killed or spared. If spared, he leaves and returns to Prifddinas, watching the city regrown to its original state. Much to his surprise, he soon encountered the adventurer in Prifddinas, not expecting that the elders would have opened the city for all the races, retiring from the military and settled in with his wife, Mwynen. [11]

It appears that Essyllt lies constantly, albeit poorly. Prior to joining the Death Guard, he told his wife, Mwynen, that he was an emissary of peace for the former Lord Iorwerth. [12] If Essyllt is spared, he continues to uphold this lie in Prifddinas and the adventurer has the choice to either play along, quietly receiving Essyllt's gratitude, or to confront him about it, at which point his wife, shocked and upset, will request to speak with him in private. When the asked him about a child, he attempts to lie again by saying that one of them went into the underground pass, another is cleaning up the Undercity, and the last one is wandering around. The adventurer has the option to ask him about the last child, whose name he will repeat incorrectly. If the adventurer does ask about the child, Essyllt will admit that he doesn't actually have any children; if the adventurer does not do so, no more will be said but his wife will glare at him menacingly, clearly indicating that something is amiss in his description of their alleged children. 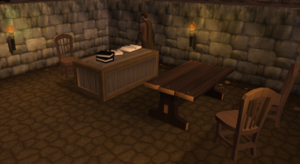 Prior to Plague's End, the head mourner can be found in his office in the basement of the Mourner Headquarters in north-eastern West Ardougne. Mourner gear must be worn in order to enter the building. If lost, two keys can be found on his desk: a tarnished key to the jail room next door and a new key to open the western basement door to the tunnel leading to the Temple of Light.

After Plague's End, if he was spared during the quest, he may be found alongside his wife, Mwynen, within the Iorwerth manor in Prifddinas.