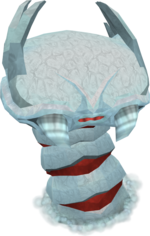 Ice strykewyrms are level 93 Slayer monsters. They can only be killed when assigned on a Slayer task or a slayer contract, with the exception of one kill needed to complete a Fremennik Elite Task, or if the player is participating in the Rush of Blood D&D. Players must complete The Tale of the Muspah before Slayer Masters will assign these creatures.

To be assigned ice strykewyrms, players must either own a fire cape or a TokHaar-Kal, or have purchased the ability to attack them without fiery items for 2,000 Slayer points.[1] Players wearing a fire cape or its upgrades deal twice the damage to ice strykewyrms with fire-based spells. Without any of these, the strykewyrm will numb your hands and freeze the attack.

Players with a Mask of the White Wyrm can ask for an ice strykewyrm assignment every three days from Mandrith, Morvran, Kuradal or Laniakea. The mask confers the same damage boost as a regular slayer helm while on assignment, gives additional Slayer experience when killing ice strykewyrms, and grants additional drops every tenth kill.

Location of the cave's entrance

11 ice strykewyrms can be found in the ice strykewyrm cave. The quickest way to get to the cave is to use fairy ring code DKS, which is just south of the cave they're located in. Players can also use the Fremennik Province lodestone and run north-east.

The ice strykewyrms are found in the chamber east of the entrance. If there is water coming through the mouth, the player must block the eastern stream in the cave north of where you entered, where Jhallan was frozen during The Tale of the Muspah.

Ice strykewyrms have four types of attacks: melee, magic, freezing spell and burrow. If the player is within one square of a strykewyrm, it will use any of the four attack types. At a distance, the strykewyrm mostly uses its magic attack but will occasionally use its freezing spell (which looks like Ice Barrage), which renders the player unable to move for around three seconds and cancels the player's next attack. Simply clicking the strykewyrm will resume attacking immediately.

The ice strykewyrm's strongest attack is when it burrows underground during battle and then pops back up, dealing up to 2000+ life points to the person it is fighting. There was an update to prevent other players from getting hit by the special attack of someone else's ice strykewyrm, however it still shows the animation of the player being thrown out of the way without losing life points. The strykewyrm becomes invulnerable during this time, so attempting to attack it while it is burrowed is futile. This attack can be easily avoided by quickly moving two steps away in any direction. The further away the player is from the strykewyrm when it burrows (such as when maging from a distance), the easier it is to avoid this attack. It can also use the burrow attack if a player walks into its square and stays there for a couple of seconds, so it is recommended not to do this. The strykewyrm will not use the burrow attack if the player is standing next to an obstacle, such as the cave wall or a stalagmite.

Despite the fact that a Slayer level of at least 93 is required in order to damage them, these creatures have low defence and may be killed fairly easily.

Ice strykewyrms are weak to fire spells. Players are advised to kill them by casting Fire Wave or better using a staff, such as a crystal staff or better, and Magic power armour, such as robes of subjugation. A full slayer helmet (or an upgraded variant) should also be worn. Alternatively, players may cast Blood Burst/Barrage if they find that they need to heal, although is unlikely to be necessary. In order to damage ice strykewyrms, players must have a Slayer level of 93 or higher and be wearing a fire/kiln cape (preferably a TokHaar-Kal-Mej), unless they have purchased the ability to damage them for 2,000 Slayer points (which is not recommended, as wearing a fire cape or equivalent also increases all damage dealt to ice strykewyrms). Weaker players may wish to bring an emergency teleport and/or food, such as sharks. Level 65 or better armour, high-healing food, several summoning potions to recharge the familiar special move bar, and scrolls for your familiar's special attack are suggested.

Because they are not aggressive, players can use the Regenerate ability after a kill to heal, the drawback being the extra time that requires. Use of Regenerate, shark drops, enhanced excalibur, the Sacrifice ability, the Soul Split curse or a healing familiar can eliminate the need to bring food.

Using an ice spell on an ice strykewyrm will immediately heal it to full health.[2]