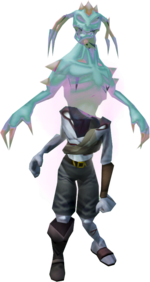 Edimmu are level 90 Slayer creatures found in the Edimmu resource dungeon in Prifddinas, which requires 115 Dungeoneering. They can only be fought while on a slayer assignment, and players will not receive an edimmu assignment unless they are able to enter the dungeon. Edimmu are assigned by Duradel/Lapalok, Kuradal, Morvran and Laniakea.

The original Edimmu in the dungeon are likely to be human victims of Vicendithas's crystal dragon. They would remain untouched for thousands of years until some of Meilyr Clan's best explorers discovered the dungeon and fell victim to them. As a result, more Edimmu spawned from their corpses and Clan Meilyr erected a barrier to contain the edimmu, assigning a single guard outside the barrier to ensure they would not escape.

They will attack with both magic and melee, and occasionally heal 25% of the damage they deal in combat. Their ashes can be collected in an infernal urn. Killing them has a chance to spawn an elite Edimmu. Wearing a luck enhancing ring will increase the chances of a powerful edimmu spawning.

As long you have the required Slayer level, edimmu can be indirectly damaged and killed using reflect mechanics, familiars, and the blood necklaces without having to meet the other requirements (the Dungeoneering level, a task or the quests for them) like most slayer monsters. However, to actually do this, one would need to use another player's Sunken Pyramid containing edimmu (thus requiring 99 Slayer). Killing edimmu this way can still spawn elite edimmu and contributes to the counter.

Like their Dungeoneering counterparts, an Edimmu's attacks has a small chance of healing them, recovering 25% of the damage dealt to the player. As zombies, they are susceptible to the effects of the Salve amulet and its enchanted version, the Undead Slayer ability and the Undead Slayer perk.

Despite being weak to slash attacks, their defences are highly deceptive - only slash weapons work against Edimmu, and all other melee weapons will have extremely low accuracy due to their 85 Defence and 30 melee affinity. Instead, players should use ranged or magic, as the Edimmus are more susceptible to these attacks compared to non-slashing melee weapons. This also saves the player time when fighting elite edimmu, as they don't have the slash weakness of their inferior brethren.

Edimmu are aggressive but fairly spread apart; a dwarf multicannon or oldak coil along with aggression potions can help bring in edimmu, but players should be careful as it is very easy to get piled from numerous edimmu attacking at once. Elite edimmu are much more dangerous than their normal ones, although they aren't aggressive but can deal considerable damage if directly attacked. Protect/Deflect Magic should only be used if more than four normal edimmu or single elite edimmu are attacking the player at once; it is fairly safe to use Soul Split with one or two attacking.

Edimmu aren't as highly aggressive compared to other monsters, but will attack players if they are next to one even if they are fighting another edimmu. Edimmu placed in the Sunken Pyramid are always unaggressive.