From the RuneScape Wiki, the wiki for all things RuneScape
Jump to navigation Jump to search
The Old School RuneScape Wiki also has an article on: osrsw:My Arm
My ArmMy Arm (easy farm requester)? (edit) 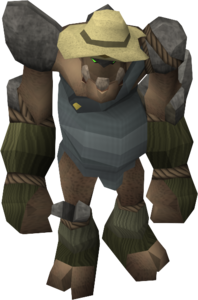 My Arm is a troll farmer at the rooftop of Troll Stronghold. He is the main focus of My Arm's Big Adventure quest as well as Burntmeat's assistant.

My Arm may occasionally appear at Manor Farm, asking for help with an easy Farming Guild request.

His name "My Arm" derived from when he was just a baby. Trolls are named after the first thing they - successfully or not - ate. Since he first tried to eat his dad's arm, his dad decided to name him "My Arm".

The following takes place during My Arm's Big Adventure.

My Arm is introduced to the adventurer at the very beginning of the quest. Burntmeat learnt that goutweed could be grown again as it was previously thought to have been botanically extinct after the trolls had picked it all for use as a cooking ingredient. Burntmeat discovered that it was possible to regrow the weed when he was interrogating a captured adventurer who he was preparing to boil into a stew, after he learnt about this he cooked him anyway. Burntmeat encourages the adventurer to speak with My Arm to begin to process of regrowing the herb.

My Arm is an avid farmer but unfortunately he has little knowledge of how farming actually works; he had planted several objects on the roof of the Troll Stronghold, such as crates, rocks and a goat, which did not grow, much to his confusion.[1] He asked the adventurer to grab a goutweed from the troll cooks in Death Plateau, and after the adventurer obtains some, he "tests" it by eating the goutweed, much to their disappointment.[2] He later accompanied them to Tai Bwo Wannai village to get hardy gout tubers since a normal gout tuber could not resist the mountain climate.[3]

While the adventurer was completing tasks for the locals in order to collect the tubers, My Arm became impatient and caused havoc in the village. The adventurer barely manages to get him back onto the boat.[4]

Upon getting the tubers, My Arm recommended that they bring combat gear from the bank before returning to the Troll Stronghold[5]. My Arm later plants the gout tuber, and with help from the adventurer, successfully grows some goutweed, throwing a Drunken dwarf off in the process. However, a Baby Roc appears, though the adventurer quickly kills it. My Arm tells them that that was just the small one[6], and the Giant Roc later appears. My Arm assists the adventurer in killing it, and after it dies, picks some goutweed and gains a Farming level.

My Arm creates a new herb patch to thank the adventurer for their efforts, ensuring that it will not become diseased.[7]

Due to being the only troll that was capable of farming goutweed, the trolls' demand for goutweed skyrocketed and he was growing as much as he could to sate their appetite. The troll warlord Pretty Flower would eventually hear of this and called My Arm down to the Barendir tunnels to grow food for him, as the warlord feared that someone would try to poison him.

When the adventurer searched the tunnels to find allies, they stumbled into the troll encampment. Pretty Flower believed they were a tall dwarf and attempted to eat them, but My Arm states that they are a human, so the warlord does not eat them out of fear of being poisoned.[8] He later gives them a pretty flower[9], which the adventurer uses by claiming that Colonel Grimsson gave it to him, resulting in Pretty Flower's army wiping out the chaos dwarf army outside Keldagrim.[10]

My Arm later appears on Yu'biusk along with Burntmeat during the The Mighty Fall quest. He says that he came to the Kyzaj Tournament in support the adventurer instead of the troll champion Lol, as he would rather cheer for a friend.[11] My Arm was initially unaware of Bandos' death[12], and only finds out when Burntmeat mentions it. He also brought a bank chest into the camp for his friend to use.[13]

When the group discovered a human infiltrator, the adventurer killed him. My Arm then told his friend to search the body for anything of importance[14], and they found a note which stated that there were more infiltrators disguised as goblins around the camp.

If spoken to after the quest, he will comment about their performance in the Kyzaj. If the adventurer killed Zanik, he doesn't seem to show any sadness or anger, stating that Zarador made a "compelling" statement, though he hopes that he doesn't get thrown into a pit with them.[15]

My Arm speaks in: 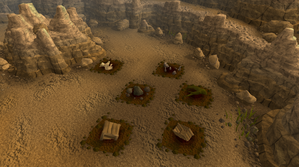 The patches in which My Arm tried to farm