From the RuneScape Wiki, the wiki for all things RuneScape
Jump to navigation Jump to search
The Old School RuneScape Wiki also has an article on: osrsw:World Gate
For the portal that leads to Mazcab, see World window.
World GateTarddiad World GatePortal? (edit)? (edit) 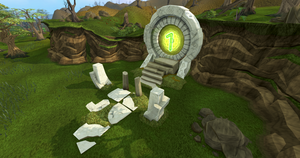 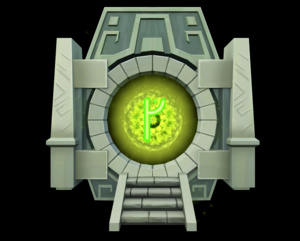 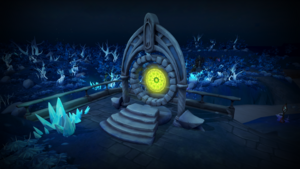 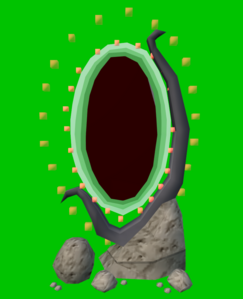 The World Gate, also known as the Portal of Life, is a dimensional passage that allows travel between worlds. It was created by Guthix with the Blade and was used to populate Gielinor with many of the races that currently inhabit it. It came into the possession of Seren after Guthix went to sleep at the end of the First Age, and in the Second Age, it was taken by Zaros and then later sealed in the Shadow Realm.[1]

It features as a major part of the Fate of the Gods quest, and is used to access Freneskae. Other worlds may be viewed through it, but they are not reachable except Tarddiad and Mount Firewake on Kethsi. If a player attempts to access any of the other worlds, they will be prevented, and the following message appears in the chat box: A mystical force stops you from stepping through the World Gate. 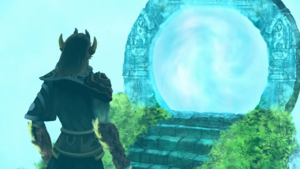 In the First Age, Guthix used The Blade to create the World Gate, and used it to bring creatures from other planes to Gielinor, such as Humans, Gnomes, Fairies, Ents and Dwarves. The elves were also brought to Gielinor from their ancestral homeland through the World Gate by Seren. According to The Book of Seren and the Crystal of seren, the World Gate was consumed by an 'emptiness' that enveloped the land, and sought to control and bend all to its will. This is later revealed to be the work of Zaros, who took control of the Gate during his reign in the Second Age in order to, in his words, "more quickly and easily explore creation, and to further [his] knowledge of magic and science". This cut off elven access to crystal, their primary resource.

Elder Mage Etheron of the Mage Conclave of Kethsi spent six years in the outer planes on an expedition. He returned through the World Gate with the Stone of Jas, which allowed the Kethsians to cast spells to better their civilisation. However, the stone later brought the Dragonkin, which ultimately caused the demise and ruination of Kethsi.

During the sixth age, the World Gate was rediscovered north of Arandar by the player. After being retrieved from the Shadow Realm by Sliske, the World Gate plays a heavy part in the Fate of the Gods quest, providing access to the mahjarrat homeworld of Freneskae. Afterwards, the World Gate remains powered at the same location, however it is currently unable to be used for travel to any location excluding Freneskae, Kethsi, and Tarddiad. During The Light Within the player gains access to use the World Gate to go to Tarddiad.

The World Gate powering up.

The World Gate was located in Isafdar at the time of the elves' arrival, and due to its consistent link to Seren's ancestral homeworld for nearly two ages likely remained there. According to the humans in Meeting History however, it was located west of modern day Ardougne, on the other side of a mountain.

When Fate of the Gods is completed, a teleport option to the World Gate can be added to the Sixth-Age circuit by talking to the Guthixian High Druid at the shrine in Guthix's Cave.

Right-click on the World Gate and select Quick Dial to access:

During and after the Fate of the Gods quest, as players reaches new areas in Freneskae, a shortcut teleport option is added: 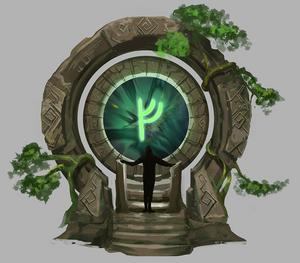 The World Gate was released in game the week before the release of Fate of the Gods, only visible with the ring of visibility. As it does currently, a mysterious force prevented players from entering most worlds, except one, "a volcanic, ash-covered world comprised solely of black rock", Freneskae. However, this world could not be accessed yet due to the gate being powered down, instead a message appeared saying "The gate isn't powered."

The gate could be powered up by switching to worlds in a correct combination, the same way as during the quest, although no hint was given on how to do it. After being powered up, trying to enter Freneskae would give the message "The gate is powered, but it's in the Shadow Realm. I can't use it like this.". Although Fate of the Gods is now released, players can still power it up before the quest, and will not have to power it up again during it.