Rorarius locations within the dungeon. Click the map to view a larger version.

The Rorarius is a member of the Order of Ascension, requiring level 81 Slayer to kill.

These monsters are found in the Monastery of Ascension, located in the Feldip Hills just west of the Oo'glog lodestone, along with gladii, capsarii and scutarii.

They also feature in Nomad's Elegy together with the other Ascension creatures. The Rorarii encountered in the quest do not require a Slayer level to harm, and are vulnerable to all forms of combat.

Rorarii are generally found near other Rorarii in packs of two to nine, with a single lone exception in the south-western section of the dungeon.

When an untagged, undamaged Rorarius is attacked by a player, it will send out a visible "alert" and cause nearby Rorarii within a 5x5 radius of the attacked Rorarii to become aggressive towards the player that attacked it. Although Rorarii use magic as with the rest of the members, they can occasionally send out a second "alert", causing some of the Rorarii to switch to melee attacks. Though extremely inaccurate due to their lack of melee stats, if the melee-using Rorarii are not interacted with, they will restore all of their health due a lack of combat.

Drop rates estimated based on 661,727 kills from the Drop Log Project, unless otherwise cited.

The average Rorarius kill is worth 10,016 coins. 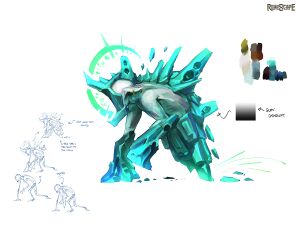 Concept art of a Rorarius; note the goblin