From the RuneScape Wiki, the wiki for all things RuneScape
Jump to navigation Jump to search
For the initial araxyte, see Araxxor.
For the achievement, see Araxxi (achievement).

Araxxi is a large Araxyte colossus and Araxxor's mate. She acts as the fourth and final stage of the boss fight after she devours Araxxor at the beginning of the fourth phase. Araxxi does not count as a spider for Slayer assignments.

Obtaining all unique drops will unlock the title [Name] the Araxyte.

Araxxi has access to most of the same attacks as Araxxor, but can also attack from all 3 sides of the Combat triangle regardless of Araxxor's starting form. She never moves from the centre of the platform. Araxxi takes on the same rage level as Araxxor except for any rage contributed by acid.

When her targets are not within melee distance, she will use either magic or ranged, depending on her target's overhead prayer. These drain overload timers and inflict poison, respectively. The magic attack travels much faster than the ranged attack. She will switch to the other style as soon as she detects her current attack is being protected against. She always attacks with magic by default if the player does not use a protection prayer, only using ranged if they pray against magic. When her target is in melee range, Araxxi uses magic and melee attacks randomly with no regard to prayers. Araxxi's melee attack does not cause a bleed effect.

Araxxi also has access to all but 2 of Araxxor's special attacks: egg bombs and acidic spiders. Instead of the latter, Araxxi has the ability to absorb the remaining acid to increase her rage. Like Araxxor, the special attacks available to her are dependent on the open paths. At 50,000 life points, Araxxi stops using special attacks but her rage will gradually increase. At 25,000 life points (35,000 in duo), Araxxi unleashes a black sludge core that bounces around, eventually targeting and damaging players. Her autoattacks begin increasing her rage by 5% for each one she performs. Additionally, her targets immediately have their adrenaline subtracted by 50% (e.g. 72% adrenaline becomes 22%).

Drop rates estimated based on 93,549 kills from the Drop Log Project, unless otherwise cited. 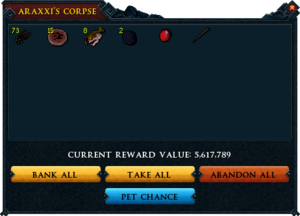 The interface for looting Araxxi's corpse. 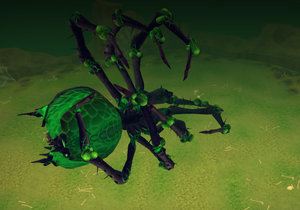 When Araxxi is killed, her corpse remains and acts as a reward coffer to collect the drops. Having tier 4 luck increases the chances of obtaining unique rewards from Araxxi's corpse. The ring may be put on after killing but prior to looting.

The drop table will always roll on three tables; 100%, food/potions and main table drop once. Effigies from Araxxi are considered a primary drop. A roll will also be made on pets (the araxyte pet itself and then eggs if eligible), leg pieces and "Add-on" drops. These three drops are all tertiary drops, so it is possible to obtain all three from one kill, although exceedingly rare.

Araxxi's corpse offers the same mechanics as the Queen Black Dragon's reward chest, where rewards may be collected into the inventory, sent straight to the bank, or be abandoned. Players without an araxyte pet also have the option of sacrificing all of their drops for a second chance at the pet. Gambling your rewards will double the drop rate of the pet, effectively tripling the original drop rate. This feature is removed once the player obtains the pet, either normally or through gambling.

Araxxi's corpse will always contain araxyte arrows, unless a pheromone, triskelion fragment, or effigy is obtained, which replaces them.

The combat style Araxxor uses affects the drop rate of the weapon-specific parts that Araxxi drops. As each part has a different inherent value, this also changes the effective average loot value per kill. The following information applies to kills in solo mode:

Prior to an update on 16 August 2021, players could not teleport out of the hive by any means once the fight has begun and the waiting time to log out was extended. Attempting to teleport out displayed the message A magical force prevents your teleport!.