From the RuneScape Wiki, the wiki for all things RuneScape
Jump to navigation Jump to search
The Old School RuneScape Wiki also has an article on: osrsw:Mazchna
Mazchna? (edit)? (edit) 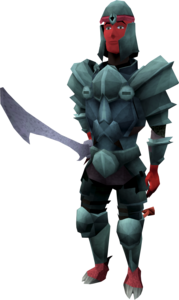 Mazchna (pronounced Mash-ner) is a low-level Slayer master located in north-eastern Canifis, very near the Canifis lodestone. He will give slayer assignments to any player with a combat level of 50 or above.

Mazchna is a demon by race; he is the only known demon Slayer master, apart from Achtryn, his temporary replacement during the quest While Guthix Sleeps. Mazchna became very skilled in combat and eventually became a Slayer master. Mazchna chased away all the other demons in Morytania to gain his Slayer master monopoly in Canifis.[1] Unlike most demons who generally cause havoc, Mazchna strives to be good.

Mazchna fought in the Skirmish at the Chaos Temple; he is one of a band of eight heroes who attempts to save the player from Lucien after the player's identity is compromised. It is seen during the battle that Mazchna has a combat level of 197. He and Harrallak Menarous are the only survivors of the strike team, as they were fighting Lucien's undead reinforcements. After Lucien leaves, Mazchna is seriously injured, but he is still able to fight and demands they chase the Mahjarrat to get revenge for Turael and Duradel's deaths. Harrallak refuses, as it would be a complete slaughter. Mazchna realizes he is right as the Slayer cause has suffered enough today with the loss of two masters, and reports the battle to Idria before returning to his post.

Completing 50 tasks assigned by Mazchna grants an average of 6.4 points per tasks, if Smoking kills has been completed.

The three monsters you have to fight are a ravenous snail (level 49) at ring BKR, a ravenous ghoul (level 70) at ring CKS, and a ravenous vampyre (level 91) at ring ALQ. The fairy rings can be done in any order.

The player does not have to finish the conversation with Mazchna after each kill, they can go to the next fairy ring immediately after killing one monster.

. For Mazchna, assuming all possible assignments are available,

Preferring a task makes it approximately twice as likely to be assigned, for the first assignment choice, but does not affect the weighting of the second assignment choice provided by a Slayer VIP ticket.[2]