Mutated jadinko males are mutant forms of the jadinko males that reside within Jadinko Lair. Normally responsible for fertilising the Jadinko Queen's eggs, mutant males would attack any of their non-mutated cousins given the chance. They require 91 Slayer to kill. These monsters, along with the level 96 mutated jadinko guards, are the only creatures to drop the whip vine, however the males have a higher chance of dropping it.

Like all mutated jadinkos, they are a good source of blue charms, noted logs, and medium to high level herbs. They are usually a fast kill and perhaps among the fastest sources of blue charms, comparable to exiled kalphite guardians and marauders.

Each mutated jadinko male kill gives the player 10 favour points with the jadinkos. Each jadinko killed while wearing the Mask of Vines (or associated helm) will increase its kill-counter.

Mutated jadinko males are weak to stab attacks. Players are advised to kill them using stab weapons, such as a Guthan's warspear or better, and melee Power armour, such as Bandos equipment. A noxious scythe or an attuned crystal halberd is another option, and can be used to inflict a great deal of AoE damage, leading to faster kills. Low-levelled players may wish to bring an emergency teleport. Juju teleport spiritbags or a Witchdoctor mask can be used to easily reach the mutated jadinko males.

Although they require 91 Slayer to damage, mutated jadinko males are not overly strong. Their damage output is low and they commonly drop food. Additionally, points received from killing them can be traded in for food. They drop mainly noted and stackable items and there is a bank deposit box right up the vine next to the queen. Most players able to damage mutated jadinko males will have high enough combat stats that they can heal solely using the food drops. Soul Split or Rejuvenate/Guthix's Blessing/Ice Asylum/Enhanced excalibur (they all share the same cooldown) can be used to heal if the food drops alone are insufficient.

The seedicide is also very useful as they frequently drop seeds. This can yield around 40,000 to 50,000 Farming experience per hour, depending on the kill speed. They are also great blue charm and elite clue scroll droppers.

If a player uses Deflect/Protect from Magic and the jadinko is unable to attack them, they will attempt a whip attack with the nearby vines: if a player were to stand near the middle with 5 vines around them and the jadinko cannot not reach them, it will bid all five of them to attack the player at once, although they deal extremely low damage, from 1-17. This attack is shared with mutated jadinko guards.

Drop rates estimated based on 634,806 kills from the Drop Log Project, unless otherwise cited.

The average Mutated jadinko male kill is worth 870 coins. 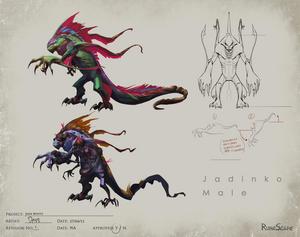