Catolax is a deceased Slayer Master bound to the plane of the living by Amascut, the Menaphite Goddess of Destruction. Since his murder, he has been bound to his tomb as a spirit. Catolax plays a large role in the Smoking Kills quest. He is the husband of Faiza.

Little is known of Catolax's early history. He was apparently a resident of the city of Ullek during the Second or Third Age. He trained to become a seasoned Slayer Master, possessing knowledge that today has been forgotten.

For unknown reasons, Catolax travelled to the Pollnivneach Slayer Dungeon, a cave system found beneath modern-day Pollnivneach. The dungeon was apparently being used by an unknown evil at the time, as is evident in the many ancient technologies and carvings still present in the area.

Catolax met his death in the cave at the hands of Amascut, whom he had angered greatly. Amascut, in an act of eternal vengeance, bound his spirit to the living plane of Gielinor, preventing him from ever passing into the afterlife. After his body was prepared and placed in the tombs of Ullek, his spirit remained unable to travel anywhere but his tomb and the site of his murder. To further torment him, Amascut made it so that, if he was discovered, he could only answer questions directly asked to him.

After Ullek fell to Balfrug Kreeyath, Catolax would continue to remain trapped, and could only watch as thieves constantly plundered the other tombs of Ullek. Because his tomb was so well protected by undead skeletons, zombies, and mummy warriors, he remained undiscovered for millennia. 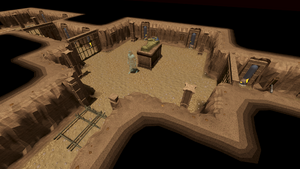 The ghost of Catolax stands by its sarcophagus.

During the Smoking Kills quest, Amascut disguised herself as a woman named Sumona, claiming to have lost her twin sister Jesmona in the Pollnivneach well. She enlisted the help of an adventurer, sending them to the well with the promise of a reward.

The timely intervention of Ali Cat the alley cat narrowly saved the adventurer. The cat, knowing that the well led to the Slayer Dungeon, warned the adventurer that they could not survive within it because of the heavy smoke and deadly banshees.

Ali Cat then sent them to Catolax, who possessed the knowledge of how to combine earmuffs and facemasks. The adventurer managed to find Catolax in the most heavily guarded part of the tombs. Unable to answer any but direct questions, Catolax told the adventurer how to combine the gear.

After besting Amascut's assassination plan in the well, the adventurer discovered that Catolax had been freed of some of her spells. Although still bound as a ghost, he was now able to speak freely, and explained Amascut's plan to kill the adventurer using corrupt insectoid assassins and an artificially controlled mighty banshee. He also told of his death, and the nature of the dungeon.

Although Amascut's plans were foiled and her control over him was diminished, Catolax was not freed from the curse and thus still remains imprisoned in this world. He can be found in two locations: his tomb and the Pollnivneach slayer dungeon.