From the RuneScape Wiki, the wiki for all things RuneScape
Jump to: navigation, search
"Curses" redirects here. For the spells that affect an opponent's stats, see Curse spells. 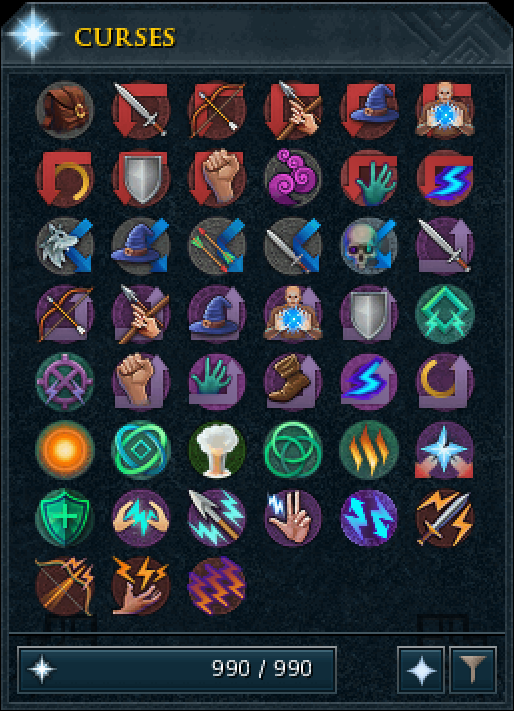 The Ancient Curses are a set of prayers obtained as a reward after completing The Temple at Senntisten. They consist of prayers ranging between levels 50 - 99 Prayer. Prayers of this set include combat skill boosts, stat drainers, and damage recoilers.

After completion of The Light Within, seven additional prayers are unlocked. These Seren prayers are focused on players performing supportive and skilling roles, rather than direct combat.

Despite not being a requirement in any of the quests, 29 Defence is required to activate any curse from the prayer book.

The main altar that activates the Ancient Curses is the Altar of Zaros in the temple beneath the Varrock Dig Site. After completing the elite Falador Tasks players can use an Ancient Hymnal on the altar in the White Knights' Castle to convert it to Zaros, allowing for activation of the Curses from that altar as well. Players who have completed Plague's End can use the Elven grimoire found within the Cadarn Clan district of Prifddinas.