Not to be confused with the Ancient Cavern upstream.

During the Waterfall Quest the dungeon is accessed in search of the Chalice of Eternity, containing the treasure of the elven king Baxtorian. During the Roving Elves quest the dungeon must be entered again to consecrate the resting place of queen Glarial. During The Light Within it is discovered that Baxtorian changed himself into a crystal statue and that the statue of his wife, Glarial contained the Seren shard of integrity.

The dungeon is often used as a combat training area. Players should be aware that shadow spiders inhabiting the first cavern of the dungeon drain half of Prayer Points up to three times at the beginning of the fight, which means they can almost immediately drain most of the Prayer Points. 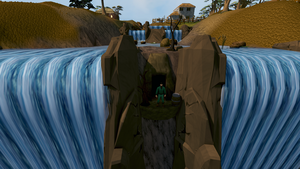 Entrance in the waterfall. 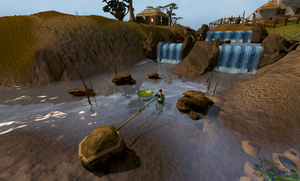 A player swimming to the 2nd island with the aid of a rope.

The dungeon is in northern Kandarin, and is entered through an outcrop on the face of the Baxtorian Falls. To enter the dungeon the player must have Glarial's amulet and a rope. Go through Almera's house near the falls and out the back gate, use the log raft there to float to an island in the river. From there, get to the next island by using the rope on the rock there. On the second island, use the rope on the dead tree and lower yourself to the ledge on the falls. With Glarial's amulet equipped or in your inventory, enter the dungeon.

The quickest teleport to the area is by teleporting with the games necklace or lunar spell Barbarian Teleport to the Barbarian Outpost, which is directly to the north of Almera's house. Another option, requiring the completion of The Grand Tree and 37 Agility, is to take the Spirit Tree to the Tree Gnome Stronghold and go north, northeast past the Grand Tree, down the tree shortcut and past the lake. Alternatively th player can run north-west from the Ardougne lodestone, past the Fishing Guild and up the fenced mountain path to Almera's house.

Player can also use the fairy ring code BJQ to enter the Ancient Caverns and use the log there to travel to the foot of the falls, close to Almera's house.

The Dungeoneering cape can teleport the user directly to the entrance of the Baxtorian Falls resource dungeon, found in the centre-north room of the dungeon.

Players with 24 Construction may build a rope rack, providing unlimited coils of rope, next to the raft that leads to the Waterfall Dungeon. This requires a saw and hammer (tool-belt tools will suffice), five coils of rope and three oak planks. Alternatively, if the player has allocated 50 points into the pet track at May's Quest Caravan, Lorehound pet can be summoned, providing a free rope.

Note: Do not attempt to swim across or climb down the tree without a rope, as this will fail and you will be washed quite a way down the river and dealt some damage. This also applies when attempting to enter the cavern without having the amulet (not required to wear).

A barrel is located next to the dungeon's entrance, allowing the players to leave the area, leaving them near Gerald, in the same spot as being washed out, but without taking damage. It was originally necessary if the players did not have access to any means of teleporting out, however due to the large number of currently available teleport options this method of leaving dungeon is largely obsolete. 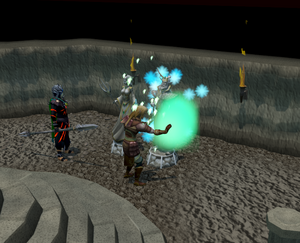 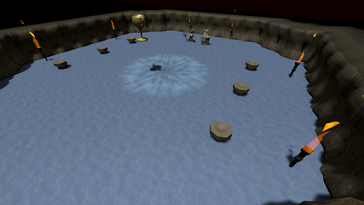