From the RuneScape Wiki, the wiki for all things RuneScape
Jump to navigation Jump to search
The Old School RuneScape Wiki also has an article on: osrsw:Tower of Voices

The Tower of Voices is a large tower found in the centre of Prifddinas. The tower is so named because in the Tower, the elves can speak directly to one of the fragments of their goddess, Seren, who chose to shatter herself rather than be forced to leave Gielinor when the Edicts of Guthix were put in place following the God Wars. The tower, formed from pure crystal, is the most important part of elven society.

During the Fourth Age, the Iorwerth Clan betrayed the other elven clans, conquering Prifddinas and denying the other seven clans access to the tower. During Within the Light it is discovered that the tower was reverted back into a crystal seed by the elders of Prifddinas. During Plague's End the tower, along with the rest of the city, is restored; after the quest the tower serves as the main hub of Prifddinas.

During The Light Within, the elven council goes into conclave on the 1st floor[UK]2nd floor[US] to discuss the return of Seren. Eventually after collecting various shards of Seren and Tarddian crystals on Tarddiad, Seren is restored. But she is soulless, to restore her soul, the adventurer brings her to the Elder Halls on Freneskae and with Zaros' help she is restored after which she returns to the Tower of Voices to speak to the Elven council. She remains here after the quest together with Baxtorian who also returned during the quest. Both can be spoken to for more information about them and other subjects. 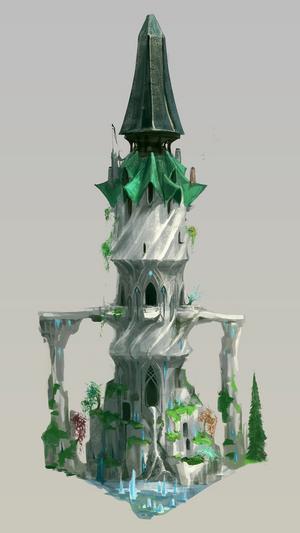 Concept art of the Tower of Voices