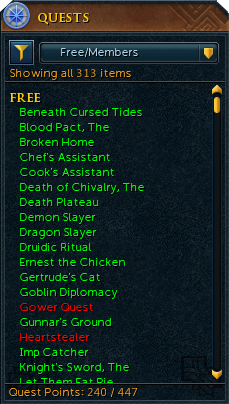 ) on the minimap, and completing them can provide rewards ranging from experience and items, to access to new areas, minigames, miniquests, and other post-quest content.

The most recent quests added to the free and members' version of RuneScape are Heartstealer and Extinction, respectively.

A repeatable quest is a quest that can be played over and over again so a player could experience the story again or explore different paths based on a choice. The quest rewards and choices made are canonical on the first play through, though replays can allow the player to unlock other follow-up rewards.

If the inventory is full upon release of a new quest, the cape and hood will be sent to the bank. If the bank is also full, the Wise Old Man will hold onto it and will return it free of charge. If multiple cape/hood sets are obtained through various methods, the Wise Old Man will only return one set if both your inventory and bank are full and the set is worn and unequipped twice.

May's Quest Caravan, also known as the Quest Point Shop,[2] is a members-only reward shop run by May, released on 24 September 2018. It can be found near the Champion's Guild, south-west of the Varrock lodestone.

All quests that have a "Quest overview" window also have a quest icon. Some of the older quests do not have a unique icon, and instead a generic quest symbol. Some quests also feature their icons next to quest-specific NPCs, items, and objects. It is unknown whether all quests will eventually be updated to have this property. The quest icons indicate whether the quest takes place in the Fifth Age, Sixth Age, or is age-ambiguous.