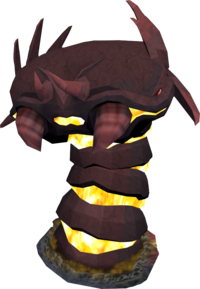 Lava strykewyrms are strykewyrms found in the Wilderness, south of the Lava Maze, residing in level 34-41 Wilderness. They require level 94 Slayer to kill and can be assigned by Kuradal, Morvran, Mandrith, or Laniakea. Unlike their other cousins where a slayer task is required to harm them, lava strykewyrms can be killed off-task. This is due to the dangers of the Wilderness, and as such these strykewyrms already sense the killing intents of those who would disturb them. However, killing them off-task greatly reduces the chances of obtaining wyrm components. They are a reincarnation of the original WildyWyrms.

Lava strykewyrms can drop wyrm spikes, scalps and hearts, which can be used with abyssal whips, dark bows, or staves of light respectively to create the lava whip, strykebow, and the staff of darkness. They also drop searing ashes, which give 200 Prayer experience upon scattering, and are also used to create Aggression potions.

If the player is killing lava strykewyrms for a Slayer assignment then they can gain 20% additional Slayer experience by equipping a demonic skull. They can gain another 20% extra experience per kill if they accept a special slayer contract from Erskine while assigned lava strykewyrms as a Slayer task. These experience bonuses are multiplicative with one another, meaning the player may gain 44% extra Slayer experience when benefitting from both. Completing a special slayer contract rewards the player with a choice of coins or combat experience. As lava strykewyrms are only found in the Wilderness and in the Dragonkin Laboratory, the latter of which provides a safer area but at the cost of less rewards, a contract should be taken if killing in the Wilderness.

Killing lava strykewyrms can be extremely profitable, as their ashes are currently worth 36,781 coins each. In addition to this valuable drop, they also have an extremely generous drop table. However, they are located fairly deep in the Wilderness, and as such, do not bring items you are not willing to lose.

Lava strykewyrms cannot be placed in the Sunken Pyramid - attempting to do will state that it requires a volcanic environment to survive.