From the RuneScape Wiki, the wiki for all things RuneScape
Jump to: navigation, search
For other uses, see Wyvern (disambiguation). 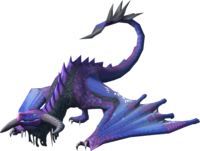 Wyverns are dragon-like monsters in the Asgarnian Ice Dungeon. They were first revealed at RuneFest 2015 after being pitched on RuneLabs and being one of the November poll winners. They require level 96 Slayer to be killed. Wyverns reside in an icy cavern beneath the area in which skeletal wyverns reside. When killing Wyverns, an elite version may spawn (guaranteed while on a Slayer assignment).

Dragonbane ammunition does not have its passive effect against wyverns, as they are not considered dragons. Likewise, despite the Dragon Slayer perk affecting skeletal wyverns, it will not affect living wyverns.

Go to the Asgarnian Ice Dungeon, enter the skeletal wyverns' cave, and go to the south-west corner. There will be rope in a hole in the floor. Descend down the rope.

The quickest methods of reaching the cave are by using the Port Sarim lodestone, using fairy ring code AIQ to Mudskipper Point, or teleporting to the Asgarnian Ice Dungeon resource dungeon with a Hoardstalker ring or Dungeoneering cape.

Upon entry, the player is somewhat cold and the base poison damage from wyverns is 300. This means the player is experiencing the "Cold" (around 20-25%) mechanic and should light one of the static fires nearby. As the player gets colder, an icy overlay becomes more visible on their screen. Several mechanics will take place depending on the chill from the cavern:

Standing within two spaces of a lit fire will slowly warm a player. Lit fires will only last a short time before they must be lit again. The chill effects can be reset by leaving the cavern, though this generally isn't needed for most slayer tasks.

The wyverns have two ice breath attacks: their normal one (used by their skeletal brethren), and a poisonous one. Whenever the wyvern uses the poisonous ice breath, a message will appear and say "A strong wyvern poison corrodes into your bones." Using elemental workshop shield of any sort, dragonfire shield or the wyrmfire potion will block the damage from their ice breath attacks, but will not protect against the ensuing poison attacks.

Antipoison++ will halve the damage of the poison, but each tick of poison damage will decrease the time left on the antipoison potion. Overload salve's antipoison duration is affected by the poison breath but will protect from the wyvern's ice breath. The poison from this attack ignores the effects of the poison purge auras, the venomblood perk, incense sticks and the anti-poison totem from Dungeoneering.

Dragon slayer perks and equipment will not affect wyverns.

Wyverns attack in a manner similar to Araxxi; at a distance they use both magic and ranged attacks. If the player is next to them, they will only attack with melee. It is highly recommended to fight them in melee distance regardless of equipment used, because the wyvern's melee attack is weaker and easier to predict, whereas the magic and ranged attacks are nearly impossible to predict and the attack immediately deals damage before the projectiles even hit the player.

A dead wyvern that The Raptor killed 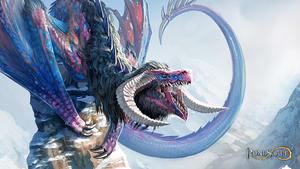 Concept art of the wyvern