From the RuneScape Wiki, the wiki for all things RuneScape
Jump to: navigation, search
"Mammoth" redirects here. For other uses, see Mammoth (disambiguation).
The Old School RuneScape Wiki also has an article on: osrsw:Mammoth

Acheron mammoths are monsters that require level 96 Slayer to kill. They were first revealed at RuneFest 2015, after being pitched on RuneLabs and being one of the November poll winners. They drop mammoth tusks, which can be used to summon the pack mammoth at level 99 Summoning.

Several Acheron mammoths inhabit an iceberg that has been separated from Acheron, far north of the Fremennik Province. This can be reached by using the large Fremennik ship on the pier north-east of Rellekka (Outside of the city wall, directly north of the Fremennik province lodestone). Do not confuse the ship with the other one nearby; the smaller ship takes you to the iceberg during Cold War. The easiest way to not get confused is by right-clicking the left ship at the pier and choosing the "Travel-Mammoths" option.

Acheron mammoths possess a ranged stun attack which can freeze players, deal heavy damage, and disable the player's prayers/curses if attacked with Magic or Ranged. As such, mammoths should be killed with melee, primarily stab weapons as they are weakest against those types of weapons.

Acheron mammoths slowly gain adrenaline and can use the abilities Smash (disabling the player's protection prayers/curses), Sever, Freedom, and Pulverise along with a basic melee autoattack, which can deal around 2000 damage at maximum. When using Freedom, mammoths announce it by shouting "Freedom!". Unlike the player's Freedom, the one the mammoths use simply frees them from stuns and binds; it does not clear any bleeds.

The mammoths have a ranged attack where they grab a chunk of ice from the ground with their trunk before tossing it into the air, landing at the player's position when the mammoth started preparing the attack. This attack can be avoided by moving away from the tile the player was on when the mammoth first picked up the rock. It is best to dodge or Resonance the ice chunk, as it can deal over 4000 ranged damage with a 100% hit chance regardless of armour. They can use melee attacks during the ranged attack's animation.

They have a unique prayer deactivation mechanic they use if the player performs "dishonourable" conduct during the battle, which is performed by continuously running away from the mammoth and staying out of reach of its melee attacks. Note that there is no warning to this attack, and it appears as if the mammoth was using a standard ranged attack. The attack launches three ice chunks around the player's position. If any of these ice chunks hit the player, a message will appear stating that "Your dishonourable conduct during the duel has angered the gods, who refuse to listen to your prayers any longer.", disabling all prayers currently active (including Protect Item and Turmoil), drains all run energy, causes the player to be bound, and deals heavy ranged damage.

Prayers can be immediately reactivated after being hit by the "dishonour" attack. However, it is possible for all 3 ice chunks to simultaneously deal damage to the player, potentially resulting in an instant death. Furthermore, players using weapons augmented with the Aftershock perk should be careful not to hit any other mammoths besides their current target with it; doing so can result in being attacked by the other mammoth's "dishonourable conduct" attack.

Occasionally, the mammoths will stop attacking and have a charge-like animation. In addition, a blue bar will appear above the mammoth and fill up within 5 seconds.

Once the bar fills, the mammoth will charge up to 3 times in a row. Each charge can deal up to 8000 melee damage, and if Berserk or the Berserker aura is used, it is possible for the mammoth to instantly kill the player with one charge if it is not protected against.

The most effective way to reduce damage from the charge attack is to activate Resonance, which will heal the player to nearly full life points. The player should still be wary of any ranged attacks the mammoth may perform, since the charge animation will override their ranged animation. Protect from Melee or Deflect Melee. This will reduce the mammoth's damage to around 2000 per hit, and can be stacked with Devotion or Debilitate to further reduce damage.

Another effective way to avoid the damage is to run a direction perpendicular to the mammoth's charge. If the mammoth is charging north, for example, run east or west. Then run in a different direction to avoid additional charges by the mammoth.

The heavy damage of the ranged attack can severely harm or kill the player in conjunction with the charge attack, especially if the mammoth used the triple rock prayer deactivating attack or Smash. The mammoths can still be killed during their charge-up, preventing all damage from the charge.

When initiating a fight with an Acheron mammoth, the player automatically says one of the following lines:

The mammoth will then respond with one of their lines respective to what the player said:

If the "Mammoth! I challenge you!" option is said, the mammoth may say "My name is <name>!". When this happens, it will also change their name label to the name they said. 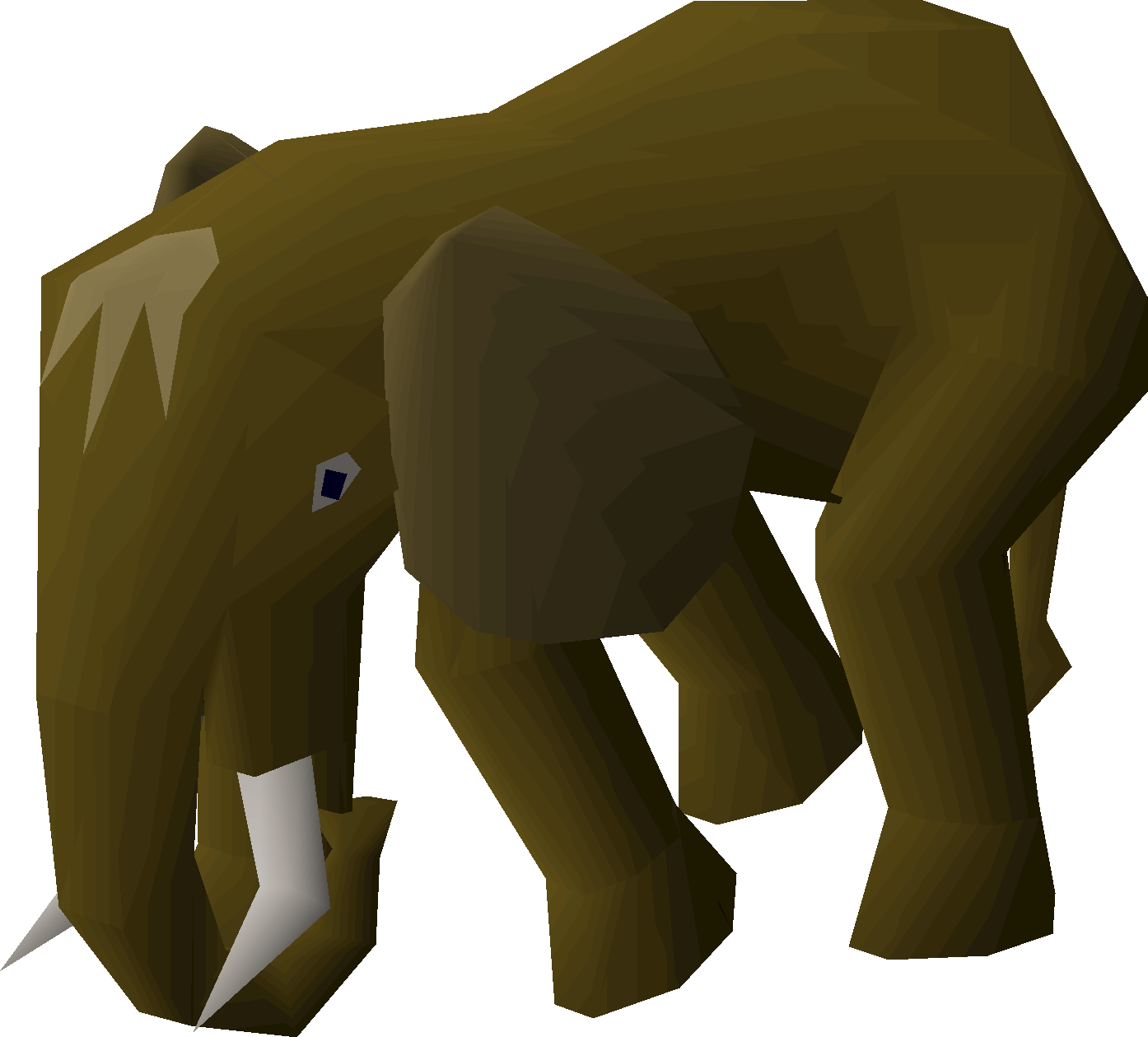 The original, unused model of the mammoth from 2004. 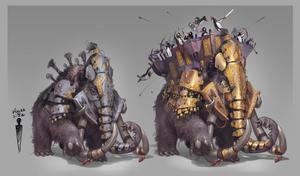