From the RuneScape Wiki, the wiki for all things RuneScape
Jump to navigation Jump to search
The Old School RuneScape Wiki also has an article on: osrsw:Turael
Not to be confused with Torrell.
Turael? (edit)? (edit) 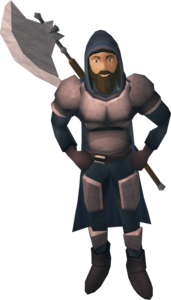 Turael is the lowest level Slayer Master, along with his daughter Spria. Turael resides in Burthorpe, just north of the lodestone and south of the castle. There are no Slayer or combat level requirement for players to receive Slayer assignments from him.

If asked, Turael can change a player's Slayer task assigned by a different master to one that he will assign. He only does this once per assignment, and only if the first assignment is for a creature that Turael himself would not assign. After completion of Smoking Kills, changing a task in this way will reset the task count back to zero. Turael's tasks also do not award Slayer points upon completion, nor do they count for the five no-point tasks before beginning to gain them.

Ava, a budding scientist and young assistant to the Professor of Draynor Manor, moved into Draynor Manor and sought to improve the residence by providing a new bed. Among the materials she needed to create the bed are twigs from an undead tree in the area. Turael, or his daughter Spria if he is replaced, assists the adventurer by offering a blessed hatchet, which can cut down undead trees, in exchange for a mithril hatchet and a holy symbol of Saradomin. With Turael's, or Spria's, help, the adventurer is successfully able to provide all required materials for Ava's new bed. Turael, and also Spria, continue to offer blessed hatchets after Ava's mission is complete.

Turael joined a band of eight heroes recruited by the adventurer to fight Lucien. During this time, Spria was formally given the position of Slayer Master and assumed Turael's responsibilities, as Turael was unable to serve his usual functions as a Slayer Master during this mission. These eight heroes jointly attempted to save the adventurer from Lucien after the adventurer's identity was compromised. Turael was one of the six who perished in the ensuing battle. Despite his considerable strength as a human, he was no match for the immensely powerful Lucien, who wielded the Staff of Armadyl at the time. During the battle, he tried to directly attack Lucien with his Steel halberd, but it simply broke without dealing any damage. On Turael's death, the adventurer vowed to avenge him. Turael was succeeded as a Slayer Master by his daughter, Spria. Statues of him were built in front of the Slayer Tower, White Knights' Castle, and Falador Park in his honour, alongside statues of the other Slayer Master who perished in the battle, Duradel.

He planned to retire and take up viticulture and give Bernald some competition after killing Lucien, had he survived the battle, with Spria replacing him. Unfortunately, he never survived to fulfil this dream, though Spria did replace him, as he wished.

*Many slayer monsters have numerous variants of the monster assigned. This list is not inclusive of all variants. Please check the monster's page for more specific information about the different variants.

'ello, and what are you after then? 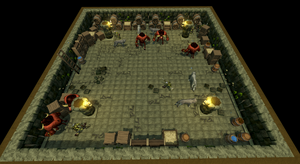 Turael's special task is for the player to slay, in a single trip, all of the beasts in Turael's basement. The monsters are:

His basement is found next to his house east of Challenge Mistress Fara, south-east of Turael himself. The ladder is south of the house and not marked on the map.

. For Turael, assuming all possible assignments are available,