From the RuneScape Wiki, the wiki for all things RuneScape
(Redirected from Toolbelt)
Jump to navigation Jump to search
For the tool belt used in Dungeoneering, see Dungeoneering/Tool belt. 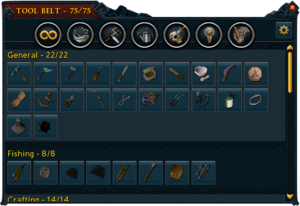 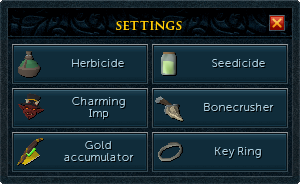 The interface for configuring items stored on the tool belt

The tool belt is a utility belt available to all players that can be accessed in the Worn Equipment screen. It allows players to carry and access basic tools at any time without taking up space in their inventory. It was released on 6 December 2011 along with the Money pouch.

Items can be added to the tool belt by right-clicking on an item while it is in the player's inventory and selecting the Add-to-tool belt option. All non-quest items are automatically added to a players tool belt. Once the items are added, they remain there permanently (with the exception of pickaxes and mattocks) and therefore cannot be retrieved. Upon death, all items in the tool belt are kept, even if the player dies in the Wilderness.

Except for hatchets, only tools that the player has the required level to use them can be added to the tool belt. If an added hatchet has a level requirement higher than the current level, it will function as the highest levelled variant the player is able to use. Dragon or crystal tools will function as a rune version on a free-to-play world. It is impossible to add a members-only tool to the tool belt on a free world.

Completely filling up the tool belt unlocks the title [Name] the Tool. When new tools are released, the title is relocked until the player adds the tools to their toolbelt.

Items that can be stored[edit | edit source]

See Category:Tool belt for a list of all items that can be added to the tool belt.

There are currently 74 item slots in the tool belt divided into 7 categories.

Augmented tools (pickaxes, hatchets, fishing rods, etc.) cannot be stored on the tool belt; players who wish to augment their tools for use with perks will have to wield the item or keep it in their inventory.

If more than one type of tool can be used, players can choose which one to use

Because of the tool belt, players are able to click on an object to perform an action instead of having to use a tool on it. For example, once a tinderbox is added to the tool belt, players can click on a log to light it instead of using a tinderbox on every individual log. Alternatively, right-clicking on a log gives a list of other possible actions that can be used with the log.

Free-to-play tools are available for use on free-to-play servers. Thus, as an example, a free-player may light logs using a stored tinderbox, saving bank space on the numerous tools used.

In the event that a player has a stored pickaxe or hatchet, but has another pickaxe or hatchet in their inventory or wielded (and has the level to use both), the better tool will be used. For example, cutting wood with a dragon hatchet in the tool belt and an inferno adze wielded will use the adze, while mining with a dragon pickaxe in the tool belt and adze wielded will use the dragon pickaxe.

A sextant added to a tool belt may be used by opening the interface and right clicking it or by right clicking a clue scroll in the player's inventory.