From the RuneScape Wiki, the wiki for all things RuneScape
Jump to navigation Jump to search
This article is about the feature that regenerates players' energy. For the tea, see Guthix rest.

Rest is a feature which allows the player to regenerate lost energy at a greater pace by laying on the ground. It was released on 9 June 2009.[1]

Players can right-click the run button next to the minimap and select "Rest" from the menu. By default, resting players sit down in a relaxed stance; alternating between two possible sitting positions (three for female characters). While in this stance energy and life points will regenerate far quicker. At level 1 Agility, run energy will regenerate at 2.8 points per second when resting as opposed to 0.44 points per second when not. Life points are also regained much faster.

Rest is not functional if one is poisoned, being attacked, holding a banner, or in the form of a monkey, goblin or a penguin. Therefore, the resting ability does not give immunity to the attacks of other players or NPCs. 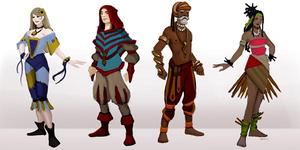 Concept image of the Musician, which was formerly known as Buskers.

The button originally appeared in the 25 March 2009 system update along with an option to turn run mode on and off. When selected, the message Coming Soon... appeared in the chatbox.

Jagex stated on the RuneScape Forums that the rest option would not be linked to fatigue or sleeping bags.

On the 19 March 2009, Jagex created a RuneScape account on Facebook. One of the pictures added shows a player battling Chronozon, and a message in the chat box that reads: You feel much better after a quick rest., undoubtedly a reference to the rest feature. This showed the Rest button would have some kind of restoring properties.

On 1 April 2009 the Rest option was removed. That same day in the RuneScape Forums, Mod Ash stated: "The Rest option is coming soon. I'm not sure exactly when. Until it does finally come, there's no real need to leave it sitting there doing nothing". On 23 April, Jagex released a development diary stating that the Rest feature was a mistake. The diary also states that the rest feature will centre on what was originally known as buskers, musician NPCs who play their instruments.

On 9 June 2009, the Rest feature was finally issued, dubbed as improvements made towards the current state of the run energy.[1] 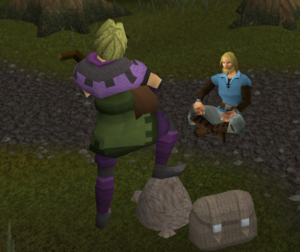 A player restoring run energy by resting whilst listening to music.

Musicians are NPCs added with the release of the Rest feature, scattered widespread around various locations in Gielinor.[1]

When listening to a Musician, energy will regenerate at an even faster pace. At level 1 Agility, resting near a musician regenerates energy at 3.8 points per second instead of 2.8 when resting normally or 0.44 when not resting at all. When listening to any one of the many musicians with Music enabled, the in-game music will switch to a different track, in lieu with the instrument played by the musician.

Resting animations can be activated at any time via the Customisation interface of the Gear tab, under Animations. If more than one resting animation is activated, one will be used in sequence from the order they were activated each time the player rests, starting with the first activated.

Note that animations on this page are not loaded with the page, click the link to load a single animation.

Soon after the opening of Solomon's General Store, new resting animations were made available for players. The first ever resting animation is the Zen Resting, which has since been free for all members.[2]