A player levelling up

Experience, commonly abbreviated as XP or exp, is a measure of progress in a certain skill. It is generally obtained by performing tasks related to that skill. After gaining a certain amount of experience, players will advance to the next level in that skill, which can result in unlocking new abilities, items, and other achievements. Experience can be earned by training skills, completing quests, and participating in activities, such as Distractions and Diversions and Minigames. 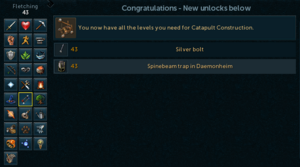 The Skills Advance menu after levelling a skill.

Experience in a skill is obtained by performing a task related to that skill. Experience can also be gained by completing a daily challenge, a quest, or a miniquest or by playing a minigame.

For skills where failure is a possibility, experience is usually only granted on completion of a successful action. For example, if a player cooks a lobster rather than burning it, they will gain a minimum of 120 Cooking experience. Experience gains can be increased in a variety of ways, including bonus experience, skilling outfits, and the effect of bonfires on Cooking and Firemaking.

Players who help others using the Assist System can earn a maximum of 30,000 total experience every 24 hours, although the experience may be shared among many skills. Some skills cannot be assisted, namely combat and gathering skills, such as Attack and Mining.

Until the Skills Interface update on 12 November 2007, players with a level 99 skill could view the experience it would take them to earn level 100. However, even when "level 100" was "reached", the actual level remained at 99, and it would not show the experience required to achieve level 101.

The amount of experience between levels rises by a factor

Total experience required for a level approximately doubles every 7 levels (disregarding the first 20 levels), triples every 11 levels, quadruples every 14 levels, and increases almost ten-fold every 23 levels.

The minimum total experience needed for a given level, L, is given by:

means the greatest integer less than or equal to

. This is also known as the 'floor' function.

This equation can be rewritten as:

is some number between 0 and 1. Using

The middle term always dominates. The total experience between consecutive levels is therefore

For all levels above about 20 (i.e. for levels where 83 experience is negligible), doubling experience after reaching a given level will result in rising seven levels, since

While the main method of gaining experience is practice in the skill (including combat) substantial amounts of experience are available from other sources.

It's unknown at which steps experience is rounded. The wiki calculator currently assumes no rounding occurs until the end and then rounds to the first digit after the decimal.

The majority of buffs in the game fall under this category and are additive with each other.

The only buff that goes in this category is bonus experience. It multiplies everything else by 1.5x.

Boosts thought to affect items processed or collected per hour