From the RuneScape Wiki, the wiki for all things RuneScape
Jump to navigation Jump to search
Item JSON: {"edible":"no","disassembly":"no","stackable":"no","stacksinbank":"yes","death":"alwaysinclwild","name":"Charge pack","bankable":"no","gemw":false,"equipable":"no","members":"yes","id":"36389","release_date":"25 January 2016","release_update_post":"New Skill - Invention","lendable":"no","destroy":"You cannot destroy this item until you complete the Invention tutorial.","highalch":false,"weight":0.01,"lowalch":false,"tradeable":"no","examine":"Added to your toolbelt, provides power to all equipped Invention devices.","noteable":"no"}

The charge pack acts as a universal battery for augmented items. It is the first invention the player makes in the Invention Tutorial and is added to the tool belt. It therefore cannot be dropped and is kept on death even if the player is skulled and dies with it.

It is half-charged at 100,000 when players create it. A divine charge can be used to add 3,000 charge. Each unit of charge costs 22.39 coins when using charges bought at Grand Exchange median price.

Even if the charge pack depletes, augmented equipment still retains its gizmos and experience and can still be equipped. However, most augmented items no longer offer any bonuses without charges, get tier 1 stats, all perks become inactive, and weapons that use the charge pack, such as the Augmented Zaros godsword, have their special attack become unusable. Augmented items do not level up without charges.

This set of research increases the maximum number of charges that can be stored in the charge pack.

This set of research decreases the drain rate of augmented items by a flat rate. See below for the full formula. 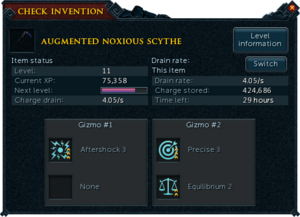 Most augmented items (whether or not they have gizmos) no longer use the equipment degradation system, and instead drain charge from the central charge pool each second of combat (this applies even to items that did not degrade before augmentation). This rate depends on the item that has been augmented, and can be reduced by researching charge drain reduction. Some augmented items (such as those from the Trimmed masterwork set) still degrade normally instead of using charges from the universal charge pack.

During combat with augmented items (or skilling with a relevant augmented tool), charge is drained similarly to how non-augmented degradable items degrade. Each hit dealt or taken (ability or otherwise), or each skilling action, 6 ticks (3.6 seconds) of charges are drained at once, with a 6-tick cooldown before more can be drained. This means that charges can be wasted easily; for example, an imp killed in one tick will still drain six ticks of charges.

The charge drain rate of an augmented item depends primarily on the item's tier and slot, but it is reduced by several factors:

Charge drain rate is displayed to two decimal places, but is actually calculated to at least 3 or 4 and rounded down when displayed.

The charges drained per second

This information has been compiled as part of the update history project. Some updates may not be included - see here for how to help out!
Retrieved from ‘https://runescape.wiki/w/Charge_pack?oldid=35835904’
Categories:
Hidden categories: