From the RuneScape Wiki, the wiki for all things RuneScape
Jump to: navigation, search
Rubium? (edit)

Rubium is an ore that players can only mine deep within the Witchaven Dungeon at the Witchaven mine during and after the Kennith's Concerns quest.

Rubium has high reactivity with water. Thus, during the quest, it is used on the steamers to raise the room temperature significantly in order to disrupt the workers. However, the rubium will burn up if players get kicked out, so they still need to be careful not to get caught. After the quest, players may sell rubium to Ezekial Lovecraft in his fishing shop, based in Witchaven for 10 coins per ore. Doing this is required for the medium Ardougne task 'Volatile Valuables'. During Salt in the Wound, Ezekial utilises homemade rubium grenades as his primary weapon.

In total, there are only twelve rubium veins located in the mine, requiring 46 Mining to be mined and yielding 17.5 experience points for each successful dig, the same experience as mining the low-level ores copper, tin and blurite, thus making it useless unless attracting mogres. It cannot be mined with the Dwarven Army Axe.

Rubium will respawn when a player leaves and reenters the mine room. 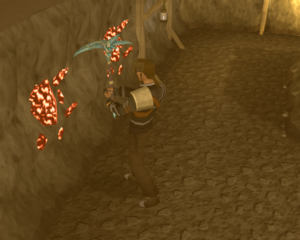 Players can mine rubium from the walls in designated parts of the dungeon under Witchaven.
Retrieved from ‘https://runescape.wiki/w/Rubium?oldid=33327773’
Categories:
Hidden categories: