The Advisor system was a mini tutorial feature to help new players learn the basic controls of the RuneScape game. The advisor system could be activated by clicking on the "question mark" button next to the logout button.

The system worked dynamically depending on the current status of the player, where the player was, and what they were doing. Each advice could be in the form of a mini tutorial, or in the form of chat messages from Roddeck, a non-player character who resides in Lumbridge.

The advisor system was introduced on 17 September 2009. The system only covers basic activities, but Jagex had promised to cover more skills and activities. This however was left unfulfilled when the Advisor system was removed on 22 November 2011. 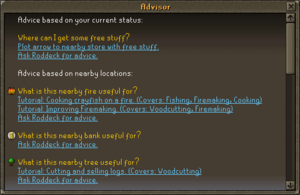 Some example questions available in the Advisor system.

The following are some examples, based on a player standing at the Grand Exchange:

This information has been compiled as part of the update history project. Some updates may not be included - see here for how to help out!
Retrieved from ‘https://runescape.wiki/w/Advisor_system?oldid=35684837’
Categories:
Hidden category: