From the RuneScape Wiki, the wiki for all things RuneScape
Jump to: navigation, search
This article is about the reward. For the quest item, see Golden hammer (Priest in Peril).
Golden hammer? (edit)

The golden hammer is a reward from using a golden cracker on another player. This item was released on 20 December 2010. It has two right-click options for emotes: Brandish (2009) and Spin (2010). These are the years in which Jagex won the Golden Joystick awards. New players prior to 31 August 2011 received the cracker in their bank and were greeted with a message explaining what the item celebrated; however, an update has removed the message. New accounts may still retrieve the cracker from Diango or Ianto.

The hammer can be wielded and used to train Smithing by using it on bars, Construction, and Crafting (to repair the Blast Furnace). It saved the player an additional inventory slot, since a regular hammer cannot be wielded. However, since the introduction of the tool belt in December 2011, the usefulness of the golden hammer has gone down, since the regular hammer can be added to the tool belt. Its usefulness has also gone down because of the release of the crystal hammer, especially in conjunction with Invention. The hammer cannot be used at barbarian assault.

If a player loses their golden hammer, it can be regained as a golden cracker by speaking to Diango near Draynor Village.

The golden cracker can be stored in the toy box in the costume room of a player-owned house; however, the golden hammer cannot be stored. 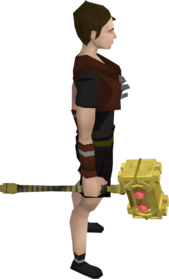