New Varrock is the main city in Dimension of Disaster. It is an alternate reality in which Varrock has been taken over by Zemouregal, where the adventurer may complete twisted versions of various quests that take place in the real Varrock. New Varrock is a safe area, where all items are kept on death.

You cannot enter or leave the city by any means other than the fountain located in Varrock Square or New Varrock Square, respectively.

You must have started Dimension of Disaster to first gain access to the city. Upon starting the quest, Aris will give you a coin, which transforms into a double-headed coin upon investigation. This special double-headed coin must be used on the fountain at the centre square of Varrock, which opens a portal through which you can enter New Varrock.

The gold currency has been replaced by the Zemomark, a new unit of currency introduced by Zemouregal. 10 Zemomarks are received upon first entry to New Varrock. Zemomarks may also be earned by various activities completed around New Varrock, such as completing quests, completing tasks on the New Varrock tasks list, selling items, and stealing loot.

Banks cannot be used for holding equipment in New Varrock, as the Skeleton clerk tells you that they "no longer serve the fleshy folk". The banks now serve Zemouregal and hold his inventory. There are also no other bankers available, and they do not provide the healing effect banks normally give.

Found near eastern Varrock Bank. Aubury sells runes. He also buys back runes from the player. You may also take up to 15 each of air runes, water runes, earth runes, and fire runes for free from the shop, which restocks periodically. Aubury also gives out an Orb of Oculus.

Horvik sells bronze armour and there are some anvils.

Found near Varrock central square. Lowe sells Ranged equipment. You may also take 30 bronze arrows and 30 bronze bolts for free from the shop, which restocks periodically.

A tanner here can tan zombie cowhides into soft leather for free or into hard leather for 3 Zemomarks each. The Tanner also sells up to 10 hard leather, for only 1 Zemomark each. Hard leather can be crafted into shields and sold to the general store for profit.

The shopkeeper only sells bronze weaponry.

Found just south of the western Varrock Bank. Sani can be found here. Unlike the Sani in the actual world, this Sani sells ores and his place also has a furnace. 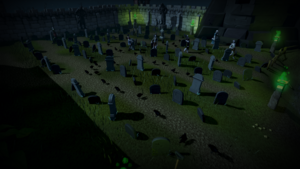 To the north-west of the city is the Graveyard. This features 29 gravestones of various NPCs with humorous examine texts. The following NPCs have a gravestone: 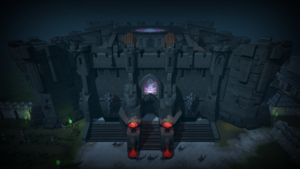 The entrance to Zemouregal's palace.

This castle is now Zemouregal's castle. The warped versions of Defender of Varrock and Curse of Arrav start here. In the middle of the castle stands a Bloodwood tree which cannot be cut. The staircases in the south-eastern area of the castle goes up to the 1st floor[UK]2nd floor[US].

The castle has been greatly changed, as the outer walls have been torn down, the jail section, most of the stairs, and the room above Reldo's library in the actual castle has been replaced or removed. He also has a treasure room which contains various items, such as the Raptor's armour and a stuffed Wise Old Man, suggesting that he had beat them in combat.

Zemouregal has changed Reldo's library into his throne room, moving the library to western wing of the castle. It contains a collection of unreadable books.

The gates of New Varrock are guarded by three New Varrock guards and one New Varrock captain. They can be attacked, and drop items such as coal, studs and spider silk. When approached, the guards will always turn to face the player.

The pillories of New Varrock are crowded, and like the real Varrock, there are three of them. This time, Meg, Hazelmere and Pauline Polaris are in them. Talking to them results in some humorous dialogue. The Tramp's insults are relevant to the aforementioned characters as he is throwing rotten tomatoes at them. Players can also get a rotten tomato here which is necessary for one of the subquests. 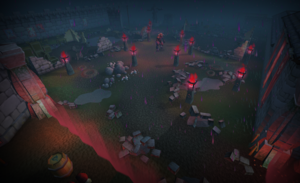 East of the East Varrock Bank, zombie cows can be found. They can be killed for zombie cowhides and raw undead beef. There is also a zombie dairy cow who gives curdled milk, which is needed to give to Baron Mauser.

Players may pray at the altar in the Church nearest to the Museum to restore prayer points. However, upon exiting the Church, Zemouregal drains all the player's prayer points. It is possible to lure the group of New Varrock captain and guards nearby into the church, allowing players to use prayer against them. The church itself also provides safespots such as over Jeremy Clerksin.

Praying at the altar in the Zamorakian Church, where Grumps is found, will give the player a message from Zemouregal informing them that he has rewired the altars, thus redirecting their prayer toward him, and then he will thank the player. Thus, players will also not gain any prayer points here.

The New Varrock tasks is an achievements subcategory of the Exploration category. Rewards for completing the achievements in the set at each level include instant payment of Zemomarks (the currency of New Varrock), increase of Zemomarks reward whenever Dimension of Disaster: Curse of Arrav is completed, and upgrades to the Varrock armour. This set of achievements is not required for the completionist cape or for the master quest cape.