Azibo is a merchant located in the south-east part of the market place within the Merchant district of Menaphos. He serves a similar function to Diango for players who can access Menaphos. Like Diango, he will return players' lost holiday items and Treasure Hunter items, gives out golden crackers, and his shop, Azibo's Toy Store, has the same stock as Diango's Toy Store.

Azibo returns the same reclaimable items as Diango. Besides the standard holiday items, Azibo can return pets and many items obtained from Treasure Hunter and Squeal of Fortune. However, some can only be reclaimed for a given amount of coins due to combat stats. 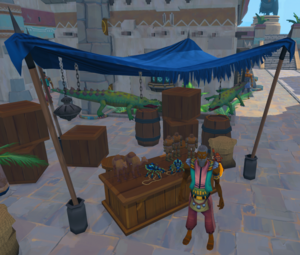 After the bank rework taster update in 2018, players have the ability to access Diango directly from their bank, allowing them to store and withdraw items from him.

This information has been compiled as part of the update history project. Some updates may not be included - see here for how to help out!
Retrieved from ‘https://runescape.wiki/w/Azibo?oldid=35768593’
Categories:
Hidden categories: