The Quest kit (basic) was a reward from Mobilising Armies. Only one kit could be owned at a time. It had the ability to hold items that were commonly used in quests. This item was similar to the Rogue kit but stored one of each item instead of turning into it. It held rope, a tinderbox, a spade, a candle, a needle, and a pestle and mortar. It could be used during quests to save inventory space. Every time a game of Mobilising Armies was completed, the kit replaced any used items. It was banned on Entrana although it contained no items that can be used for fighting. The addition of the tool belt has made this item useless, as the spade, tinderbox, needle, and the pestle and mortar can all be added to the tool belt. Although the candle can't be stored in a tool belt, simply carrying a single candle would take up as much inventory space as a quest kit with a candle inside.

Converting your Sacred Clay Proto Tool into a needle did not allow you to carry it in the Quest Kit. 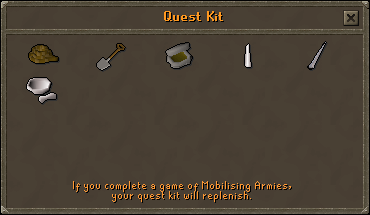 Note: As this item is no longer sold, this is a list of stores that previously sold it.
This is an auto-generated list (update now). For help, see the FAQ.

This information has been compiled as part of the update history project. Some updates may not be included - see here for how to help out!
Retrieved from ‘https://runescape.wiki/w/Quest_kit_(basic)?oldid=35685752’
Categories:
Hidden category: