A barb-tail harpoon is a one-handed wieldable harpoon obtained by hunting barb-tailed kebbits and harvesting Divine deadfall traps. As well as being a weapon, it can also be used for fishing. Prior to the addition of the tool belt, many players preferred to use this harpoon over the regular harpoon, as it could be wielded and did not fill an inventory slot, allowing an extra fish to be caught. It also requires no Attack level to wield, but requires level 35 Fishing to be used. It has lower stats than a bronze sword, as it has tier 5 accuracy but only tier 1 damage.

It cannot be used to create ibis pouches, normal harpoons must be used for that. 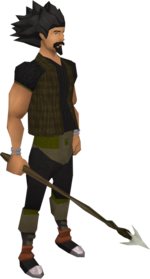