Tool leprechauns are non-player characters found wandering near Farming patches around Gielinor. They provide three basic functions: storing Farming tools, exchanging harvested items into banknotes, and teleporting players to the Vinesweeper minigame. They are replaced by tool elves in Isafdar and Prifddinas.

A tool leprechaun may occasionally appear at Manor Farm, asking for help with an easy Farming Guild request. 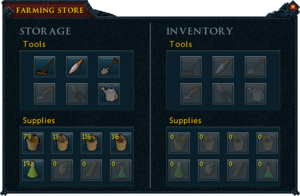 Leprechauns will store many of the tools that players use for Farming, but they will not store seeds or crops. The tools stored are available to all the leprechauns. Leprechaun Larry (found on Troll Stronghold) sells an assortment of Farming-related items.

All Tool leprechauns can carry various Farming tools for you and you can retrieve them from any leprechaun:

A feature of the tool leprechaun is that they will swap harvested crops for banknotes if the player uses the item on it—this includes clean herbs. The one exception to this is the leprechaun at South Falador allotment, who will refuse to exchange cabbages, claiming that the whole farm stinks of them. Leprechauns will not note nightshades, or logs.

Leprechauns, except for the leprechaun on Harmony Island and Leprechaun Larry, can also teleport players to the Vinesweeper minigame. To do this, players can right-click on it and select 'teleport'. The leprechaun will then say "Avach nimporto!", and the player will arrive at the minigame. There is a portal north-east of the farmhouse to return to the patch.

A leprechaun teleporting a player to the Vinesweeper minigame.

A female leprechaun in Falador Park.