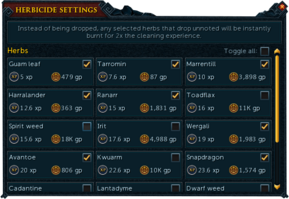 The interface that players can use to choose the herbs that are destroyed when obtained as drops.

Herbicide automatically destroys grimy herbs from monster drops and rewards the player double the experience that would have been received from cleaning the herb. There are certain restrictions for this effect:

The herbicide collector upgrade can be purchased from the Farmers' Market for 25,000 beans. The upgraded herbicide can be set to automatically pick up any herbs that are not burned (apart from noted ones), similar to the effect of the upgraded bonecrusher. In addition, the herbicide can be added to tool belt after purchasing the ability for 500 slayer points from any slayer master.

Before the herbicide collector upgrade will start picking up herbs, players need to toggle the auto-pickup option at the bottom of the herbicide settings.

Under the "Inspect" option, the player can hover the mouse over the name of a herb to see the current market price for that herb.

Like the seedicide, the herbicide trades "proper" training for combat-based simplicity. Herblore experience is awarded after killing a monster that has dropped a herb, much like Slayer experience. One benefit that the herbicide provides is that the player has precise control over what is and is not to be destroyed (leaving the valuable herbs intact while destroying the herbs that would have been otherwise ignored, for example).

On the other hand, the Herbicide is also very situational. Not all monsters drop herbs, requiring the player to engage certain monsters to make full use of the herbicide. In addition, there are no items that directly synergise with the Herbicide's erosion (other than the botanist's outfit). Additionally, the herbicide has no effect on noted herbs, so its use is restricted to monsters that drop herbs unnoted.

Ultimately, the herbicide's worth is to be decided by the player. The greatest advantage the herbicide provides is the opportunity to train combat skills and Herblore simultaneously; training with the Herbicide is by no means faster or a replacement for "proper" training. Because most high levelled combat or slayer monster has been changed to drop noted herbs, this made the herbicide less effective to use. However, if a player has high Dungeoneering and Slayer levels, they likely have an abundance of both Dungeoneering tokens to buy the herbicide and the Slayer reward points to put the herbicide in the tool belt, which eliminates the need for an inventory spot to have the herbicide in.