Catherby is a small, members-only fishing town located south-east of Camelot and west of White Wolf Mountain. It is the ultimate "go to" town for fishermen of all levels due to the variety of fishing spots available. It is also a popular town for Woodcutting, due to the vast amount of trees to the west of the town. This town is also recommended for farmers of all levels because of the allotment farming patches north of town, which are close to a bank and a farming shop, and the fruit tree patch immediately to the east of town.

There is a range in Catherby to cook fish and some farmed produce. Catherby is also a convenient place to train Herblore after completing Druidic Ritual, as limpwurt roots and tarromin can be planted with a Farming level of 26 to make strength potions. There are also unicorns to the west, whose horns are used in making antipoison. Vials can be filled with water using one of the town's water sources. Useful objects can be caught with a big net bought from the fishing shop. With level 41 Fletching, oysters caught can be chiselled into pearl bolt tips, giving 6.25 Fletching experience per shell. Seaweed can also be caught, which is an ingredient for glass blowing.

To the east of Catherby is White Wolf Mountain. This area can be deadly to low-level players because of the aggressive white wolves. To the west of Catherby are Camelot and Seers' Village and to the south-west is the mighty city of East Ardougne, the capital of Kandarin. 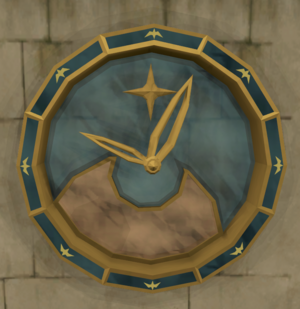 Arhein's Store offers the following default general store items. If players talk to Arhein through the dialogue box, he will offer to sell them pineapple and seaweed for 2 coins each. Players may buy 40 pineapple and 80 seaweed every day by talking to Arhein.

The candle shop sells white and black candles for 3 coins each.

There is a crate next to the candle-maker that is used to smuggle players to Keep Le Faye during the quest Merlin's Crystal. The candle shop also sells the black candle for a bucket of wax during the quest

Harry's Fishing Shop sells basic fishing equipment including small fishing nets, fishing rods, harpoons, lobster pots, fishing bait, and big fishing nets. He carries a larger than normal supply of harpoons - 1000, respawning 300 every 24 hours (one every 4 minutes 48 seconds), providing an ample supply for Summoning needs. Harry will also sell a tiny net costing 10 coins which is then used to catch a pet fish. It is purchased through his dialogue rather than the shop stock. Players must have a fishbowl containing water and seaweed in order to buy it.

Hickton's Archery Emporium sells low-level arrows and bolts. He also has a variety of bows from the regular bows to maple bows, along with the ogre comp bow. He sells arrowheads from bronze-rune, selling in batches from 100 (bronze) to 10 (rune).

Trader Stan's Trading Post can be accessed through trader crewmembers on the pier. It stocks a variety of exotic items. 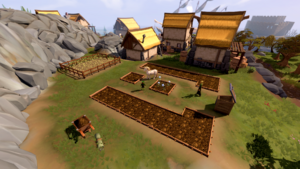 The farm of Catherby, overseen by Dantaera.

The farming spots to the north of Catherby are a popular spot to train Farming. There are two allotment patches for growing vegetables, one herb patch for growing various herbs used in Herblore, and one flower patch for growing flowers to help protect other produce. Wandering nearby is, as usual, a handy tool leprechaun. If the compost bin is full or rotting, the nearby Farming store is handy for selling low-level crops.

There is also a fruit tree patch located south-east of Catherby near White Wolf Mountain. Here players can grow their own fruit trees. Ellena will look after the tree for a fee.

Dantaera is the master farmer of the Catherby farming patches. She will happily look after a players crops for a fee. She also runs a small farming shop.

Near the fruit tree patch on the shores of Catherby is an one way Agility shortcut into Taverley which allows players to grapple up a small cliff. It is indicated on the minimap with the shortcut icon. A hidey-hole can be built on the cliff. A hidey-hole is a buildable storage spot to store a crossbow and grapple and eliminates the need to carry one. To construct the hidey-hole, level 45 Construction is required as well as a saw and hammer (the tool belt works), 4 oak planks, an iron crossbow, mithril grapple and 4 nails. Level 32 Agility, 35 Ranged and 35 Strength as well as completion of the Fishing Contest quest is also required. This shortcut cannot be used from Taverley.

An unmarked Agility grapple shortcut is located on the island containing the obelisk of Water. (The location of this shortcut is not indicated on the minimap.) This agility shortcut grapples from the island to the Catherby shore. The island is reached by climbing the ladder within the black dragon spawn area in the Taverley Dungeon.

A hidey-hole can be built for this 1-way grapple shortcut. It appears as a "Convenient rock" near a "Grapple column" on the island and spans the water to a "Strong tree" on the Catherby shore. The hidey-hole is a buildable storage spot to store a crossbow and grapple and eliminates the need to carry a crossbow and grapple to use the shortcut. To construct the hidey-hole, level 49 construction is required as well as a saw and hammer (the tool belt works), 4 teak planks, mithril crossbow, mithril grapple and 4 nails. Level 36 Agility, 39 Ranged and 22 Strength is required to use the shortcut. This shortcut is helpful when using the Obelisk of Water by eliminating the need to backtrack through the dungeon and provides quick access to a bank in Catherby. However, players cannot return to the obelisk of water or Taverley Dungeon by this method as there is no access on the Catherby shore. 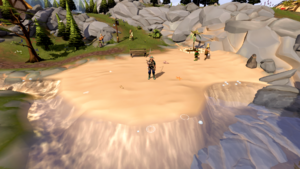 An abundance of fishing areas exists close to the east side of the town's bank. There are 2 Net/Bait spots, 2 Cage/Harpoon spots, and 3 Net/Harpoon spots, allowing players to use fishing equipment such as small nets, big nets, harpoons and lobster pots to catch numerous different types of fish. Due to the ease of access to raw fish, Catherby is a great place to feed a pet kitten to help age it.

The houses of Catherby[edit | edit source]

The range in Catherby is a popular place for the fishers nearby to cook their fish.

In the small house east of the lodestone is an insect repellent spawn. This spawn is used during the quest Merlin's Crystal. A jug of wine is on a table nearby.

There is a house to the north of the bank, containing a range and sink. There are also bucket of water, burnt fish, knife and pie dish spawns in the house. 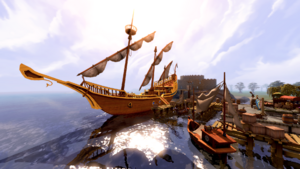 From here players can charter a ship to take them to the following places:

By wearing a ring of charos (a), players will only be charged half of the above prices (there is no charm option, so it may not be noticed). Completing the Cabin Fever quest also halves the prices. If players have completed both the Cabin Fever quest and are wearing a ring of charos (a), they will only be charged a quarter of the above prices (travel to/from Mos Le'Harmless is already halved due to the requirement of completing Cabin Fever to access it). 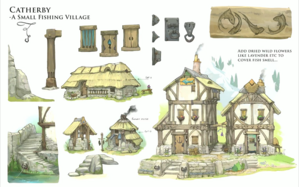 Concept art for the graphical update in 2016
Retrieved from ‘https://runescape.wiki/w/Catherby?oldid=35680217’
Categories:
Hidden categories: