From the RuneScape Wiki, the wiki for all things RuneScape
Jump to navigation Jump to search
The Old School RuneScape Wiki also has an article on: osrsw:Rantz

Rantz is an ogre who lives in a cave in the eastern part of Feldip Hills with his children, Fycie and Bugs. He is located at the only quest start icon in that area. 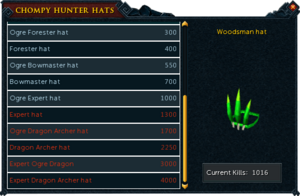 A stamp featuring Rantz from a postbag

Getting a Chompy[edit | edit source]

In year 169 of the Fifth Age, Rantz encountered an adventurer and demanded they make him some "stabbers" - ogre arrows specifically. The adventurer provided him with the arrows. Rantz then told them how to lure the chompy birds by using bloated toads from the nearby swamp to do so. When the adventurer returned with the toads, he instructed them to place them in the clearing south of his home. A chompy bird arrived soon after, but Rantz was unable to hit it. The adventurer offered to help, so Rantz reluctantly gave his bow to them. After they killed the chompy bird, Rantz told them that he wanted onions, and that his children would also request an additional topping. The adventurer was surprised he wanted them to cook the bird too, but Rantz stated that he could not cook, as he had a stomachache when he last did so.

The adventurer returned with a cooked chompy bird with all three requested toppings, and the family happily ate their dinner.

Rantz then began to offer the adventurer chompy bird hats of varying "ranks" based on how many chompy birds they killed, along with charging for additional ogre bows should they lose theirs.

The following takes place during One Small Favour.

Following a series of unusual requests, the adventurer spoke with the Tindel Merchant about some iron oxide that Wizard Cromperty needed to free a girl after she volunteered for one of his teleportation spells and ended up in a rock face. The Tindel Merchant stated that he could acquire some iron oxide, but requested they fill up his bed with feathers from Rantz, as he had not had a good nights' sleep for some time. The adventurer reluctantly complied and headed to Rantz, asking them to fill the bed with feathers.

Rantz was upset however, as a gnome had landed recently and scared off all of the chompy birds with his work. The adventurer met with the gnome and fixed the light system, upon which they returned to Rantz. Rantz was thankful for their help and was able to hunt once more, filling the empty bed with feathers.

After Skrach Uglogwee was frozen by Aris to protect him from the Culinaromancer, Aris told the adventurer that they would need to give him a jubbly, his favourite food. Aris told the adventurer that they would have to speak with the "most confusing beast" in all of RuneScape, Rantz, as he had knowledge on how to catch a jubbly bird. The adventurer went to Rantz, who would help them, but needed them to bring some items from the "other lands", pointing to Karamja. He shot an arrow that landed near the village of Tai Bwo Wannai, and the adventurer provided a cooked chompy bird so that his children could find the best seasonings there.

Upon doing so, Rantz told the adventurer how to catch jubbly birds.