From the RuneScape Wiki, the wiki for all things RuneScape
Jump to navigation Jump to search
For the achievement, see Perils of Ice Mountain (achievement).

Perils of Ice Mountain is a quest about the effects of global warming on Ice Mountain, and, ultimately, all of Gielinor.

The dwarves of the Dwarven Mine have built the latest marvel of dwarven engineering: a machine to automatically make pickaxes for the many miners. In order to supply energy for this machine, they have commissioned a new power station on the slopes of Ice Mountain.

Projects of this scale are never without their problems, though. A hapless dwarf delivering resources to the power station has lost part of his delivery and any adventurer who helps him is bound to find more problems to solve.

Bushes to be searched

Talk to Lakki the delivery dwarf to start the quest. Lakki is on the road between Gunnarsgrunn and Falador, south of Ice Mountain. He will reveal that he has lost one of the crates which he was supposed to deliver to the Power Station.

Offer to help Lakki find the crate. He will note that he took the road from the west, and will go on with his remaining crates.

Search the bushes along the road that leads back towards Falador to the southwest. One of them (different for each player) will contain the crate that Lakki dropped. If you look inside of the crate, you will see a large egg. 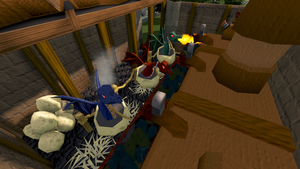 The baby dragons powering the machine.

Take the box to Drorkar, the dwarf in the Power Station west of the entrance to the Dwarven Mines. It will become evident that Drorkar is feeding dragon hatchlings coal and using their breath to power the station. He will ask you to deliver a letter to Brother Bordiss at the Monastery of Saradomin. Pickpocket Drorkar before you leave for the Monastery to receive a Dwarven key.

Deliver the letter to Bordiss. He can be found in the garden area on the north end of the monastery. After some conversation, Brother Althric's roses will begin dying.

Offer to help Brother Althric, which requires level 5 Farming. The roses are from a cold climate and it seems that it has been getting warmer lately, when the cold winds from ice mountain would usually keep it cool. He will ask you to compost and water the roses, to keep them alive for the time being. 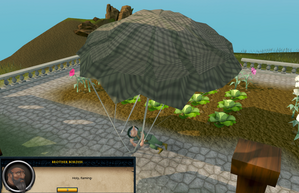 The dying red roses are the tiny plants on the west side of the garden. Use a bucket of compost or supercompost on them (not on the ground), and then water them with a watering can. A cutscene will ensue, in which the roses spring back to life, but then a gnome named Professor Arblenap lands by parachute and asks directions to Ice Mountain. After he runs off to the mountain, Brother Althric will ask you to find out what he wants.

Talk to Professor Arblenap at the top of ice mountain, near the Icefiends. Professor Arblenap will explain that he is trying to catch baby icefiends, to save them from extinction. Ice mountain, currently the icefiends' only habitat, is getting too warm for them to live. He will be failing pathetically, so offer to help him. He will give you a net and ask you to catch four baby icefiends.

Talk to Arblenap again, at which point a cutscene will play in which an avalanche rocks the northern side of the mountain. Arblenap uses a Grand Tree Seed Pod to teleport to safety, while you decide to check for any devastation. 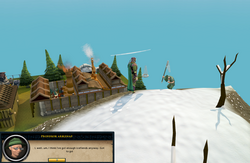 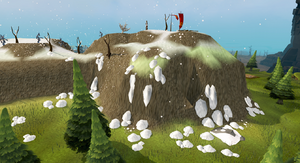 Travel to the north part of the mountain and talk to the Oracle, whose tent was swept down the mountain. Agree to rebuild the Oracle's tent. 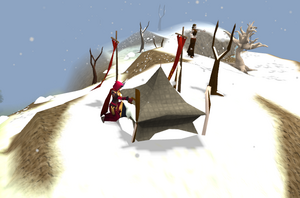 Fetch the Wrecked tent from the base of the mountain (near the Black Knights' Fortress). You will need 2 planks of any type (protean planks will not work) and 2 nails of any metal to repair the tent.

Return to the tent remains at the top of the mountain with these materials and the damaged tent. "Use tent" on the "remains", the area where the tent used to be. If you try to repair the tent in the wrong place you'll get the message "You can't just rebuild the Oracle's tent anywhere. You should use the tent on the place where it used to stand."

Talk to the Oracle again and get a dire prediction that rising temperatures are threatening Gielinor. Tell the Oracle you will try to do something about this.

Talk to Drorkar again at the Power Station, and discuss the evidence that the power plant is causing damage to the environment. Drorkar will dismiss all of the issues except for when you mention the Oracle, at which he will suggest that you have to convince Nurmof to shut down the station.

If you haven't already, take this chance to pickpocket Drorkar for a key as doing so now will save you plenty of time and effort.

Head down into the Dwarven Mines and find Nurmof, who is located in the North-western part of the mines, just north of the cart conductor. Nurmof will tell you about the alternative power station that Brother Bordiss designed. He will note that there was a presentation made with two competing ideas for providing energy in the power plant to run his pickaxe machine, with presentations by both Bordiss and Drorkar. Although Nurmof liked Bordiss' idea, since it wouldn't require fuel or replacement parts from Keldagrim, Bordiss was unable to attend the meeting for some reason and Nurmof was forced to go along with Drorkar's idea.

Talk to Bordiss again at the Monastery. He will tell you that the plans are in his magically locked chest which is located in the mine shop. Bordiss also tells you that Drorkar may be the one who stole his chest key (unless you already pickpocketed Drorkar, in which case he is sure).

The location of the chest.

If you haven't already, pickpocket the Dwarven key from Drorkar.

Head back down into the mine. Head east of the ladder and open the chest, which is beside the yellow standard. The plans appear to be a windmill, somewhat like the milling windmills throughout RuneScape but larger.

Take the plans to Nurmof, and present them as an alternative energy source. Nurmof reads through the plans and decides to build the windmill to replace Drorkar's power station. You will see a cutscene in which the polluting power station is supplanted, to Drorkar's fury, by the clean-power one. 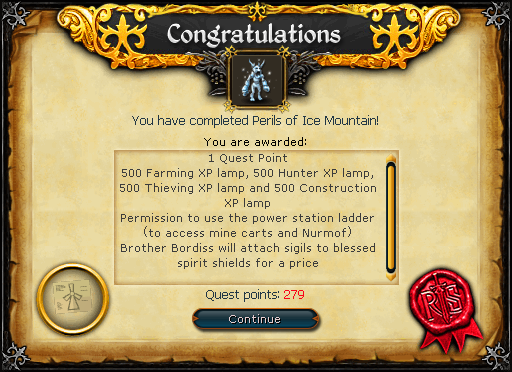 Perils of Ice Mountain is not currently required for any quests or miniquests.