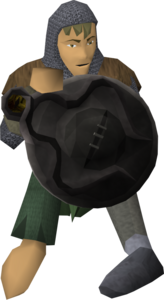 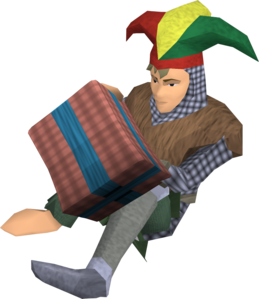 Marmaros Thokson is a Fremennik warrior and the younger brother of the self-proclaimed master of Dungeoneering, Thok. He is found near the castle above Daemonheim, located south-west of the Fremennik banker and Dungeoneering tutor, and serves as a Rewards trader, trading Dungeoneering tokens for rewards, such as Chaotic equipment. He also offers to repair the degradable equipment he sells, which can be paid for with either coins or a combination of coins and tokens.

If the player asks him about his name he will eventually say: "They called me Ma...", but is then interrupted by the player who guesses some names; he then realises he does not recall his own name.

During the 2010 Christmas event, Marmaros could be found at the Heimland Games, wearing a jester hat. The player could not claim rewards, only attempt to explain to him what Christmas is.

It is possible to receive parcels during Parcels from the Hedge delivered from Marmaros.

Marmaros accompanied his older brother Thok when Daemonheim emerged to explore. It was soon discovered that Daemonheim was incredibly dangerous, but Thok continued to barge his way floor after floor with ease. Marmaros was more level-headed and was responsible for helping maintain their equipment, supplies and solving puzzles. While exploring Daemonheim, Marmaros realized that the floors were endless and nightmarish; to retain his sanity, he wrote a series of letters and also to prove they had explored Daemonheim fully.

They were forced to ditch their original equipment after the seers created a barrier preventing them from bringing outside items in and inside items out. While exploring Daemonheim, he was fascinated by the alien materials, he named one of the types of ore after himself and a type of clothing texture after his sister.

As they continued exploring Daemonheim, Marmaros talked about an encounter with an insane libraromancer. On the way, the two also had a competition to see who could kill the most monsters. After an Unholy cursebearer ran off with Thok's primal two-handed sword, Marmaros believed that he would have an advantage over his older brother. He was quickly proven wrong as Thok began using his fists to completely batter everything in his path.

Marmaros continually commented on Thok's determination and ability to travel throughout the danger-filled dungeons in a way that suggested he himself did not share the same zeal. In one letter, Thok writes that Marmaros got stomped by a 'big stomp creature'.

While clearing another floor, Marmaros and Thok encountered Stomp, which severely wounded the former. Thok was able to heal his injuries, but Marmaros was skeptical about Thok's journey to find some medical supplies when he claimed to have defeated many boss monsters on one floor. Thok likely wrote his letter this way due to his limited vocabulary, as demonstrated when talking to him, or in his response to a player's letter in Postbag from the Heim. He was pleased to see that Thok had found a way to help him back on his feet, but neglected to take care of the injuries he sustained doing so, causing them to have a miserable trek through the occult floors.

They eventually cleared the occult floors and headed to the warped floors, eventually making it to floor 59. It was on this floor that they encountered a hope devourer, which drained Marmaros of all hope.

Thok was able to defeat the hope devourer, but when they arrived at the bottom of Daemonheim, voices began filling their heads with words of hate; coupled with the hope devourer's draining, Marmaros attempted to slit himself with his sword, causing Thok to break his arms to stop him from killing himself. A mysterious man soon arrived and restored the pair, but forced them to return to the surface and wiped their memories of the event, leaving Marmaros with amnesia as he struggled to remember what happened to him.

When more adventurers came to explore Daemonheim, Marmaros struck a deal with the Smuggler and began selling contraband items such as gravite and chaotic equipment, and would help restore them when they needed to be repaired.

Eventually, an adventurer discovered all of their letters, proof they had gone to the depths of Daemonheim. Marmaros learned that they were saved by a "man with a white beard", causing Marmaros to suspect someone and that if his suspicions were right, he had some explaining to do.

Transcripts Rewards trader is the author or co-author of: