From the RuneScape Wiki, the wiki for all things RuneScape
Jump to: navigation, search
Not to be confused with Imcando mattock.
For this item's augmented variant, see Augmented Imcando pickaxe.
For other variants of this item, see non-imcando, gilded, enchanted.
Imcando pickaxe? (edit)

The Imcando pickaxe, or the augmented variant, can be combined with the crystal pickaxe and a blast fusion hammer at any anvil to make the Pickaxe of Earth and Song.

If a player decides to have Nastroth reset their Defence level to 1, the Birthright of the Dwarves quest will be reset and the Imcando pickaxe will revert back into a dragon pickaxe. When killed in the Wilderness and holding it in the inventory or wielding it, on drop it will remain as an Imcando pickaxe and not revert to gold or any other item.

Best method to farm the Imcando pickaxe fragments would be by world hopping worlds for the lava geysers, averaging 10-20 minutes to collect all four. 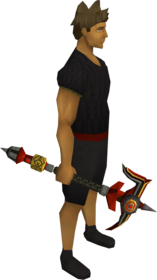