From the RuneScape Wiki, the wiki for all things RuneScape
< Dungeoneering
Jump to: navigation, search
For the tool belt used outside of Daemonheim, see Tool belt.

This tool belt was first announced in the April 2012 Behind the Scenes, and was released on 11 April 2012. It is a version of the tool belt accessible in Daemonheim. The tool belt comes stocked with all the tools a player needs in Daemonheim, including a novite pickaxe and hatchet.

The pickaxe and hatchet will be upgradable, and the upgrades will persist across floors. Players can also put a tool they don't have the level for yet onto their belt, and it will act as the equivalent of the highest level they can use, and the same applies for members-only pickaxes and hatches in free worlds.

Any Dungeoneering keys found by a party will also be accessible to the entire party via an interface on the tool belt. 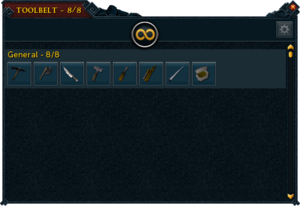 The Dungeoneering tool belt, with pickaxe and hatchet equipment upgraded to primal

The default equipment on all tool belts is:

If a player upgrades to a pickaxe or hatchet they cannot yet use, they will get the message "Your Mining/Woodcutting level is too low to use this pickaxe/hatchet. It will act as the highest tier pickaxe/hatchet your Mining/Woodcutting level allows until you are able to use it." This means any player can add primal tools and still be able to use them without level 99 Mining or Woodcutting.

Whenever a key is found, a brown message appears in the party's chatboxes, saying "Your party found a key: <Colour> [shape] key." The key is automatically added to the key tab of everyone's tool belts. The tool belt will only display those keys that have been found already and not yet used on their corresponding doors.