Activity Tracker is an interface that can be used to track achievements, paths, and other tasks such as those appearing in Yak Track events. It is found in the Hero interface, in the Achievements tab in the Tracker sub-tab. 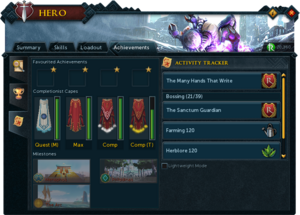 The Tracker tab of the Achievements interface

Once a task is pinned to Activity Tracker, the interface can be used to quickly see the status of the task, and to access other interfaces relevant to that task.

The child interface can be used to view the basic states of the tasks and to remove individual tasks from the tracker, while the main interface offers the ability to reorder the tasks, more information about the tasks, and relevant links. 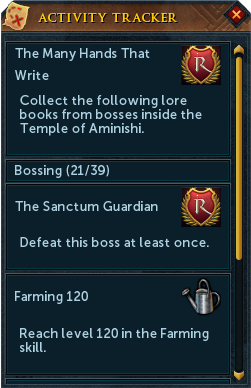 The tracker also has a lightweight mode that removes most of the interface in the child tracker apart from the tracked tasks themselves.

The update history project is a work-in-progress – not all updates to this topic may be covered below. See here for how to help out!
Retrieved from ‘https://runescape.wiki/w/Activity_Tracker?oldid=35339132’
Category:
Hidden categories: