From the RuneScape Wiki, the wiki for all things RuneScape
Jump to: navigation, search
This article is about Daemonheim. For the historical version, see Daemonheim/Pre-release.
For other uses, see Daemonheim (disambiguation).

Daemonheim (pronounced "Dee-mun-hime"; /ˈdiːmənhaɪm/[1]) is a huge dungeon created by the Dragonkin and was being explored by the Mahjarrat Bilrach, found beneath an ancient castle located on an icy peninsula in the eastern Wilderness. It is one of the places where players can train the Dungeoneering skill besides Elite Dungeons, bonus Resource dungeons, Sinkholes, Tears of Guthix, penguin points, or experience lamps.

Most of Daemonheim's history is told through the Chronicles of Bilrach, which are discovered as a player trains the Dungeoneering skill. Currently, an army of Fremenniks have set up a campsite in the area to prepare for their next expedition into the enormous labyrinths below the castle.

A taint is present in Daemonheim; the Fremennik have set up a quarantine to prevent anyone from taking items in or out of the castle. Therefore, one cannot bring items into the dungeons with the exception of a ring of kinship, Daemonheim auras, the Dungeoneering cape and master cape, skill pendants, the mad necklace, Gorajo cards, Keepsake Keys, Dungeoneering party simulators, Advanced pulse cores, Cinder cores, the Festive aura, and an orb of oculus, so it is necessary to have enough room in the bank to deposit items. However, some Fremennik have smuggled items out and have them available for the price of a certain number of Dungeoneering tokens. Players can form a raiding party for Dungeoneering here by entering the free-for-all room and being matched with a party or using the ring of kinship to make a party of the player's choice. It is also possible to go in alone. 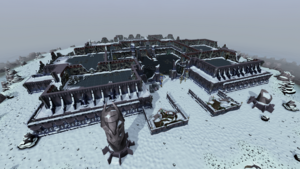 The outside view of the castle. 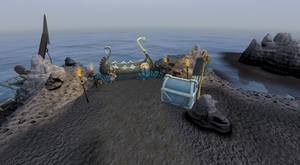 The place where players arrive if they travel to Daemonheim by boat. 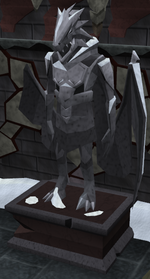 The castle was likely built by the Dragonkin, as evidenced by this statue.

Not much is known about the history of the area prior to Bilrach's arrival. It is known to have been built as a stronghold or even the Dragonkin Castle, and evidence of their habitation can be found all over the area: Dragonkin statues can be found at the top of the stairs to the ground floor[UK]1st floor[US], and there are pillars with Dragonkin faces on them outside.

The Mahjarrat Bilrach wrote in one of his journals that he thought the castle to have been abandoned, but unbeknownst to him, only the surface had been abandoned, and the Dactyl Dragonkin Kerapac was in his own dungeon beneath it, experimenting in his laboratory. 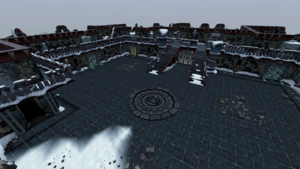 The entrance to Daemonheim.

Long after the castle was built, the Zamorakian Mahjarrat Bilrach begun digging the dungeons of Daemonheim in year 1225 of the Fourth Age. He enslaved a large number of followers, including humans, giants, and hobgoblins, in order to help him reach an area known as the Rift. The Rift is believed to be an area where space is unstable and where the boundaries between dimensions are weak, possibly located miles below Daemonheim. To this day, it continuously distorts Bilrach's tunnels, causing their layouts to be random each time they are visited. It also created new plants, metals, and new species of fish, all which are tainted by the Rift's magic. Bilrach's plan was to dig towards this Rift and unleash his master Zamorak upon Gielinor.

In order to acquire the resources necessary for the construction of his massive dungeon network, Bilrach also uncovered several remote locations hidden from the rest of the world, now known as resource dungeons. Among these dungeons included sources for rocks, woods, and followers. These dungeons were sealed off with the same magic used in the construction of the rest of Daemonheim. Thus, a certain Dungeoneering level is required to enter them.

To ensure that no one followed him into his tunnels, Bilrach also filled his tunnels with enormous traps and puzzles and experimented with portal magic to acquire even more followers such as Kal'gerion demons, stalkers and behemoths to guard the tunnels he dug, creating an enormous dungeon network below the castle. Unfortunately, during one of his portal experiments, he accidentally opened a portal leading to the realm of the Gorajo, a magical tribe of humanoids. The Gorajo were strictly against necromancy and demon summoning and attempted to stop him. Today several members of the Gorajo can be found inside the dungeons such as the divine skinweaver and the enigmatic hoardstalker.

At some point, Elven explorers reached Daemonheim and did enough exploration to discover many of the unique herbs and plants found within. The Meilyr Clan took charge of mastering the skill and offering its resources to the elven city of Prifddinas. After the Iorwerth Clan betrayal of the other clans and takeover of Prifddinas near the end of the Fourth Age, Lady Meilyr retreated to Daemonheim, and used a potion to find a hidden room to continue her own studies in exile, safely away from Lord Iorwerth, while awaiting the chance to restore Prifddinas. The restoration of Prifddinas came with the help of an adventurer in year 1 of the Sixth Age, at which time Lady Meilyr returned to resume her duties as Clan Elder and lead her clan in Prifddinas.

In year 169 of the Fifth Age, a strange power washed over the entirety of Gielinor. Every single human was lifted into the air and faced directly towards Daemonheim, with red mist circling around them. After the recent Mahjarrat Ritual of Rejuvenation that same year, the Zarosian Wahisietel revealed that the disturbance was caused by the death of a Mahjarrat, most likely Bilrach. The power drew the attention of the Fremennik tribe, whose Seers were easily able to point to the source of the power they felt. The Fremennik sent an army to investigate the source of the power. After arriving at the castle, they gave the dungeons beneath their current name, Daemonheim, translated into "Demon Halls", although, as Thok, Master of Dungeoneering says, the dungeons contain much more terrifying creatures than demons.

The discovery of Daemonheim also attracted many adventurers from all over the world. Today, the Fremennik, along with the many adventurers supporting them, are raiding the dungeon's floor by floor trying to reach the source of the strange power.

The NPCs on the surface of Daemonheim mostly consist of Fremenniks. They include:

On 22 February 2010, exactly thirty days after the strange power, Daemonheim was suddenly released. At the time, it was known to players as the Wilderness Castle. Curious players tried to get in, but were unable to as the castle was blocked off by the Fremennik guards named Hilda and Torsteg. Hilda mentions that Daemonheim was the source of the strange power and have blocked it off to contain an unknown threat. Some players, however, attempted to view it using the orb of oculus and found some tents and a ruined castle.

All of the confusion was cleared up on 12 April 2010, when Dungeoneering was finally released. Since the re-release of the Old Wilderness, Hilda and Torsteg now guard the entrance to Daemonheim from invading PKers. 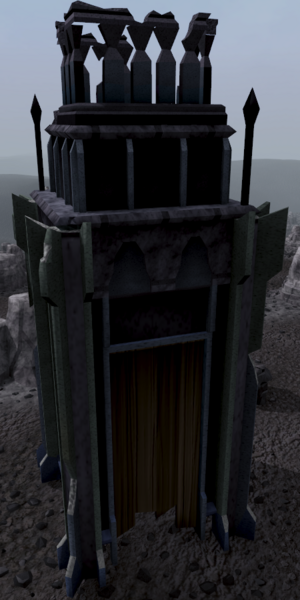 Structure found on the Daemonheim peninsula

After the release of the first resource dungeons on 19 July 2010, mysterious structures appeared on the Daemonheim peninsula, in particular a tall tower structure. This was later revealed during the quest One of a Kind to be the way into another dungeon: Kerapac's private laboratory where he researches for a cure to his people's curse. He notes that he has taken the rooms of his laboratory out of the standard rotations of rooms so that they don't become part of Daemonheim. He assures the player that despite the recent incursion by Bilrach and the Fremennik, the castle remains an inhabited Dragonkin stronghold.

During Dishonour among Thieves the player meets Zamorak on floor 60 and assembles Zamorak's team to steal the Stone of Jas from Sliske. After the quest, the hideout can be used to access the Stalker dungeon.

A structure near Daemonheim that resembles the face of a Dragonkin.

Other structures appeared on the Daemonheim peninsula on 19 July 2010. It is currently unknown what these structures may represent or what they may be used for in future updates to Daemonheim. One of them seems to resemble the face of a Dragonkin. New decorations were also placed on the castle floor - the same main symbol but more detail added. Also, on 19 August 2010 a new update was added in which the occult floors were released. Currently, in the lobby, there is one waiting room for each set of floors, circling clockwise up to the Warped floors. Each room has a coloured logo inside. The Warped floors, which were released on 2 November 2010, span from the floors 48-60 and require up to level 119 Dungeoneering to complete. According to the Game Update FAQ in the Recent Updates Forum for the week of the Warped floors' release floor 60 is not the bottom of Daemonheim and that a finale event is planned. At the end of December 2014, there was a poll polling between a Floor 61 quest and the next Myreque quest, The Lord of Vampyrium.