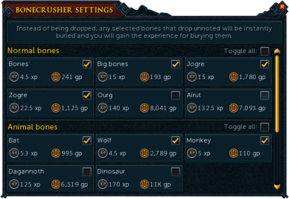 The interface that players can use to choose the bones that are buried when obtained as drops, with the auto-pickup upgrade unlocked.

The bonecrusher is a reward bought from Daemonheim rewards trader. It requires levels 21 Dungeoneering and 21 Prayer to purchase and costs 34,000 Dungeoneering tokens.

When a player has a bonecrusher present in their pocket slot, inventory, or tool belt, all bones defined by the bonecrusher's settings dropped by monster kills, or obtained from hunting, will be automatically converted into Prayer experience. However, the bonecrusher does not have any effect on ashes dropped from demonic beings, with the exception being Death Spawn, which are associated with killing Nechryaels, giving 12.5 experience per Death Spawn killed, for the accursed ashes. The bonecrusher also does not auto-bury the special long and curved bones that can be exchanged for Construction experience and coins in Dorgesh-Kaan. It also does not work on bones obtained from killing other players in the Wilderness.

If tokens are obtained exclusively through training at Daemonheim, level 62 Dungeoneering is required to obtain the necessary amount of tokens.

The item needs only to be present in the player's inventory, worn in the pocket slot, or in the slayer belt for it to take effect, and may be found useful if players have a tendency to leave bones on the ground and not bury them. When a monster is killed that drops a selected bone while the bonecrusher is carried, Prayer experience is rewarded in a way similar to Slayer experience (with bones missing from the drops), with no animation or anything similar occurring. This means that this item won't slow players down at all compared to leaving bones on the ground. The bonecrusher has no effect on drops when it is left in the bank and will not work if LootShare or CoinShare is active, or in PvP activities.

The bonecrusher can be added to the slayer belt by learning how to from a Slayer master at a cost of 500 Slayer points. Once on the slayer belt it cannot be removed, however the settings menu can still be accessed via the tool belt.

If a monster drops more than one bone, such as bloodveld or jogres often do, all dropped bones that are selected to be crushed will be converted to prayer experience; the rest will appear on the ground as usual, as a separate drop. Also, long or curved bones will not be buried by the bonecrusher, as these are a separate drop too.

Bones dropped as notes, like those dropped by cyclopes in the Warriors' Guild when using multi-token mode, are not affected by the bonecrusher.

The (attuned) ectoplasmator is the equivalent of the bonecrusher for ghost-like creatures, and monsters that drop ashes.

The bonecrusher can be upgraded by Boni on Waiko for 25,000 chimes and 25 taijitu. The upgraded bonecrusher, often called the "bonepicker", has an option (Bone collector: Auto-pickup) to toggle picking-up bones that aren't marked for crushing (instead of leaving them on the floor). The bones are placed into the inventory unnoted, so this is best combined with magic notepaper, a pack yak with scrolls, or the Death Note relic to keep the bones. If your inventory is full, bones will be dropped to the ground.

This functionality is similar to the charming imp, with the options of destroy for experience or place into inventory - except the bonepicker allows the 'Auto-pickup' option to be disabled to leave them on the floor.

The bonecrusher upgrade is not a new item - buying it merely unlocks a new option on the existing bonecrusher settings interface: Bone collector - Auto-pickup.

It is worth noting that wearing a drop modifier item that changes unnoted bone drops to noted, such as the Fremennik sea boots 4 for the Dagannoth Kings, will take precedence over the bonepicker leaving the bones on the ground. However, the relic power, Death Note, that you get from handing in the Kaladanda to the mysterious monolith, will allow both of these functions to operate together.